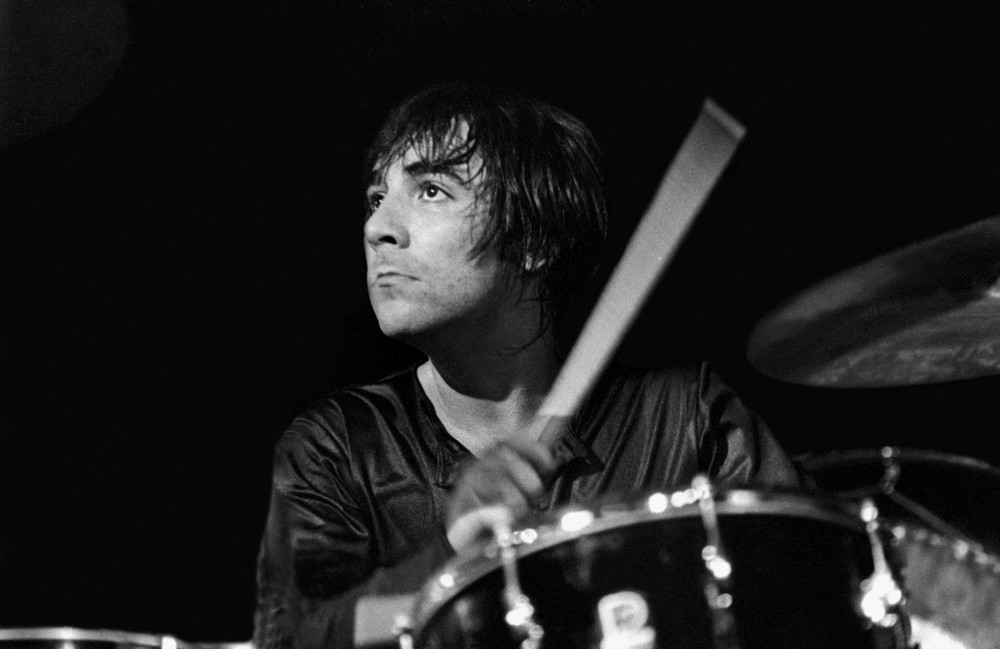 We lived the life with Keith Moon. It was all Spinal Tap magnified a thousand times.
-Roger Daltrey

Keith John Moon (23 August 1946 – 7 September 1978) was an English musician, best known for being the drummer of the English rock group The Who. He gained acclaim for his exuberant and creative drumming style, and notoriety for his eccentric and often self-destructive behaviour, earning him the nickname “Moon the Loon”. Moon joined The Who in 1964. He played on all albums and singles from their debut, 1964’s “Zoot Suit”, to 1978’s Who Are You, which was released three weeks before his death.

Moon was known for dramatic, suspenseful drumming—often eschewing basic back beats for a fluid, busy technique focused on fast, cascading rolls across the toms, ambidextrous double bass drum work and wild cymbal crashes and washes. He is mentioned in the Rock and Roll Hall of Fame as one of the greatest of all rock and roll drummers, and was posthumously inducted into the Rock Hall as a member of The Who in 1990. Moon’s legacy, as a member of The Who, as a solo artist, and as an eccentric personality, continues to garner awards and praise, including a Rolling Stone readers’ pick placing him in second place of the magazine’s “best drummers of all time” in 2011, nearly 35 years after his death.

Moon led a very destructive lifestyle. He laid waste to hotel rooms, the homes of friends and even his own home…….

Along with his drum sets, Moon’s infamous (and favourite) calling card was to flush powerful explosives down toilets. It has been estimated that his destruction of toilets and plumbing ran as high as UK£300,000 (US$500,000). His levels of destruction forced The Who to stay outside of New York City when the band performed there, and his repeated practice of blowing up toilets with explosives led to Moon being banned for life from lodging at several hotel chains around the world, including all Holiday Inn, all Sheraton, and all Hilton Hotels, as well as the Waldorf Astoria. Moon became so notorious for this practice that when Nick Harper was asked about his childhood memories spent around The Who, his first recollection was, “I remember Keith blowing up the toilets.” Keith Moon was best known as a member of the Who, but he was far more than that, even within the context of his role within the group. Moon, with his manic, lunatic side, and his life of excessive drinking, partying, and other indulgences, probably represented the youthful, zany side of rock & roll, as well as its self-destructive side, better than anyone else on the planet. In that sense, he was the soul of the Who, as much as Pete Townshend was its brain and Roger Daltrey was its heart; and, along with John Entwistle, Moon was at the core of its sound, and not just for his drumming per se. He played the skins with the kind of wild abandon that most trained musicians before him, not knowing any better, would have described as lunatic, in the worst sense of the word, and he lived his life with just about that same degree of intensity (even once running himself over with his own car). But more than the drumming itself, it was the lunacy that he brought to the personality mix of the four members that kept their music and their playing, not to mention their image, on the cutting edge of youth, even as they all moved into their thirties and tried to get more serious about music.
– Bruce Eder (Read more @ allmusic.com )

Album of the day: Live at Leeds