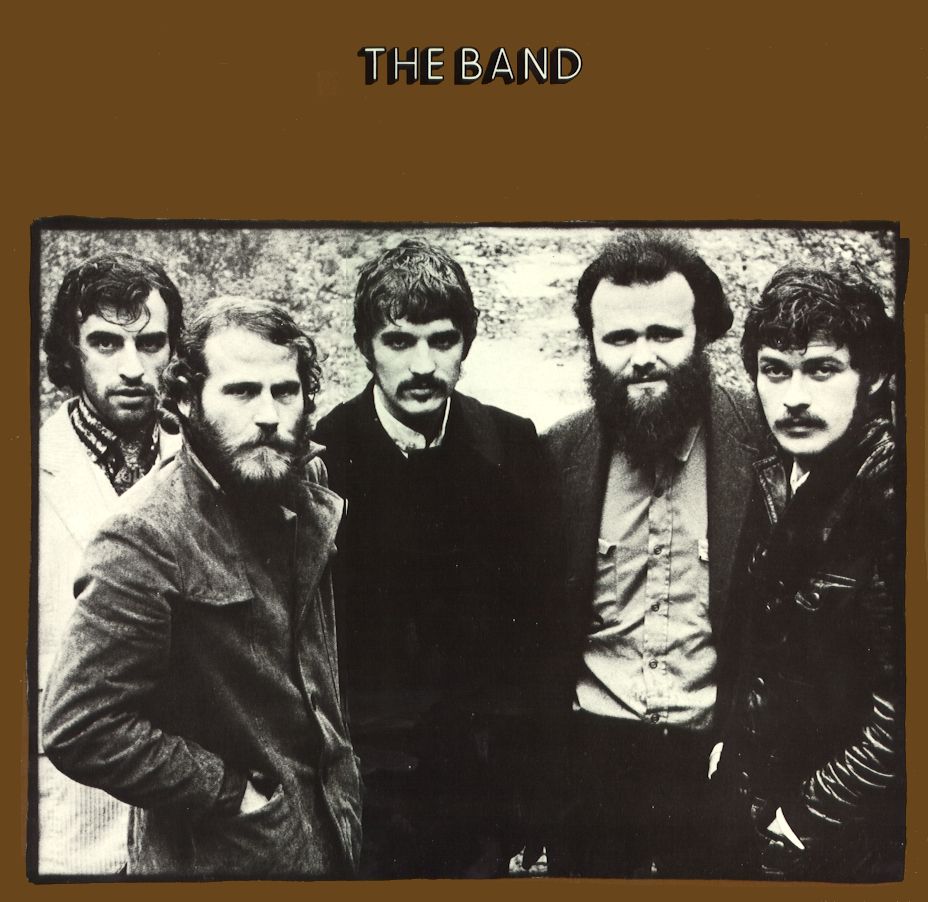 “It is full of sleepers, diamonds that begin to glow at different times. As with the Beatles and Dylan and the Stones and Crosby-Stills and Nash, the album seems to change shape as you continue to play it. The emphasis shifts from song to song and songs prominent in the early listening will retreat and be replaced in your consciousness by others, only in later hearings to move to the fore again.”
– Ralph J. Gleason (Rolling Stone Magazine)

“Perhaps the best album by any Rock and Roll group ever. Timeless, soulful, seamless, a work that goes far beyond and yet is front-porch friendly.”
– M.E. Cooper (author)

The Band is the eponymous second studio album by the Band, released on September 22, 1969. It is also known as The Brown Album. According to Rob Bowman’s liner notes for the 2000 reissue, The Band has been viewed as a concept album, with the songs focusing on people, places and traditions associated with an older version of Americana. Thus, the songs on this album draw from historic themes for “The Night They Drove Old Dixie Down”, “King Harvest (Has Surely Come)” and Richard Manuel’s “Jawbone”.

The Night They Drove Old Dixie Down (from The Last Waltz):

1. Across the Great Divide
2. Rag Mama Rag
3. The Night They Drove Old Dixie Down
4. When You Awake
5. Up On Cripple Creek
6. Whispering Pines
7. Jemima Surrender
8. Rockin’ Chair
9. Look Out, Cleveland
10. Jawbone
11. The Unfaithful Servant
12. King Harvest [Has Surely Come]

The album effectively mixed the kind of mournful songs that had dominated Music from Big Pink, here including “Whispering Pines” and “When You Awake” (both co-written by Richard Manuel), with rollicking uptempo numbers like “Rag Mama Rag” and “Up on Cripple Creek” (both sung by Levon Helm and released as singles, with “Up on Cripple Creek” making the Top 40). As had been true of the first album, it was the Band’s sound that stood out the most, from Helm’s (and occasionally Manuel’s) propulsive drumming to Robertson’s distinctive guitar fills and the endlessly inventive keyboard textures of Garth Hudson, all topped by the rough, expressive singing of Manuel, Helm, and Rick Danko that mixed leads with harmonies. The arrangements were simultaneously loose and assured, giving the songs a timeless appeal, while the lyrics continued to paint portraits of 19th century rural life (especially Southern life, as references to Tennessee and Virginia made clear), its sometimes less savory aspects treated with warmth and humor.
–Allmusic

Up on Cripple Creek:

The 12 songs that make up The Band’s eponymous second album — also known as “The Brown Album” because of its cover color scheme — seemed to have been forged in rural America sometime in the 19th century, yet they were also unquestionably at the vanguard of a new, modern rock ‘n’ roll sound, as well. Amidst the sawing fiddles, plunking mandolins and galloping pianos were electric guitars and basses and even a funky clavinet from time to time. For all of the musical allusions to old folk and country antecedents, there were other less definable nods to American R&B and early rock ‘n’ roll; sometimes, it was more of an attitude than anything else. But The Band mashed all of these influences together into a big ball and created a sound that was utterly unique and, as it turned out, quite influential.
–– Blair Jackson (Mixonline)

One thought on “September 22: The Band Released Their Second Album “The Band” in 1969”