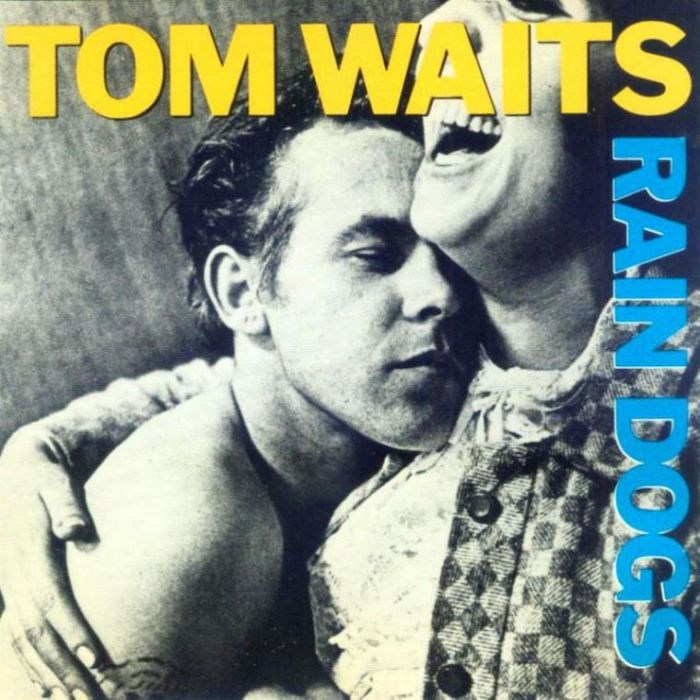 Rain Dogs is the 9th album by American singer-songwriter Tom Waits, released in September 1985 on Island Records. A loose concept album about “the urban dispossessed” of New York City, Rain Dogs is generally considered the middle album of a trilogy that includes Swordfishtrombones and Franks Wild Years.

The album, which includes appearances by guitarists Keith Richards and Marc Ribot, is noted for its broad spectrum of musical styles and genres, described by Rolling Stone as merging “Kurt Weill, pre-rock integrity from old dirty blues, [and] the elegiac melancholy of New Orleans funeral brass, into a singularly idiosyncratic American style.” Pitchfork Media listed Rain Dogs as 8th best album of the 1980s. Slant Magazine listed the album at #14 on its list of “Best Albums of the 1980’s”. The album has been noted as one of the most important musically and critically in Waits’ career, in particular to the new direction which he undertook from 1983’s Swordfishtrombones onwards.

The album is notable for its many different musical styles; among the album’s 19 tracks are two instrumentals (“Midtown” and “Bride of Rain Dog”), a polka (“Cemetery Polka”), a “kind of a New Orleans thing with trombone”  (“Tango Till They’re Sore”), ballads (“Time”), pop music (“Downtown Train”), and “a gospel thing”  (“Anywhere I Lay My Head”). “Blind Love” marks Waits’ first fully-fledged attempt at the country genre. As Waits said on the Rain Dogs Island Promo Tape (which consisted of taped comments on songs as sent to radio stations, circa late 1985):

“Blind Love” is one of my first country songs. I like Merle Haggard. Most of those other guys, though, sound like they’re all just drinking tea and watching their waist and talking to their accountant. This one I think subscribes to some of that roadhouse feel.

The song “Hang Down Your Head” is loosely based on the folk song “Tom Dooley”, with the lyrics altered but the melody remaining mostly intact. Rolling Stone called Rain Dogs Waits’ “finest portrait of the tragic kingdom of the streets.” The album’s title comes from an expression which suggests such an atmosphere. Waits cast further light on the metaphor by stating that the album was about “People who live outdoors. You know how after the rain you see all these dogs that seem lost, wandering around. The rain washes away all their scent, all their direction. So all the people on the album are knit together, by some corporeal way of sharing pain and discomfort.”

According to Barney Hoskyns, the album’s general theme of “the urban dispossessed” was inspired in part by Martin Bell’s 1984 documentary Streetwise, to which Waits had been asked to contribute music.