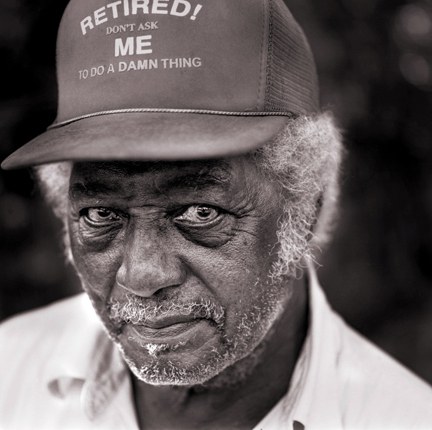 “He was a happy-go-lucky nihilist…. he took things exactly as they were. No more, no less.”
~Matthew Johnson, the founder of Mr. Burnside’s record label, Fat Possum.

“I didn’t mean to kill nobody … I just meant to shoot the sonofabitch in the head. Him dying was between him and the Lord.”
― R.L. Burnside

R.L. Burnside at home in Independence, Mississippi, shot by Alan Lomax, Worth Long, and John Bishop in August, 1978.
See My Jumper Hanging On the Line (1978):

R. L. Burnside (November 23, 1926 – September 1, 2005), born Robert Lee Burnside, was an American blues singer,songwriter, and guitarist who lived much of his life in and around Holly Springs, Mississippi. He played music for much of his life, but did not receive much attention until the early 1990s. In the latter half of the 1990s, Burnside repeatedly recorded with Jon Spencer, garnering crossover appeal and introducing his music to a new fanbase within the underground garage rock scene.

One commentator noted that Burnside…. were “present-day exponents of an edgier, electrified version of the raw, uncut Delta blues sound.”

In the 1990s, he appeared in the film Deep Blues and began recording for the Oxford, Mississippi, label Fat Possum Records. Founded byLiving Blues magazine editor Peter Redvers-Lee and Matthew Johnson, the label was dedicated to recording aging North Mississippi bluesmen such as Burnside and Junior Kimbrough.

Burnside remained with Fat Possum from that time until his death.

Burnside had a powerful, expressive voice and played both electric and acoustic guitars (both with a slide and without). His drone-based style was a characteristic of North Mississippi hill country blues rather than Mississippi Delta blues. Like other country blues musicians, he did not always adhere to 12- or 16-bar blues patterns, often adding extra beats according to his preference. He called this “Burnside style” and often commented that his backing musicians needed to be familiar with his style in order to be able to play along with him. Burnside collaborated in the late 1990s with The Jon Spencer Blues Explosion on the album A Ass Pocket of Whiskey. Consequently, he gained the attention of many within this underground music scene, cited as an influence by Hillstomp and covered on record by The Immortal Lee County Killers.

Burnside’s “Skinny Woman” was also interpolated into the song “Busted” by fellow Fat Possum musicians The Black Keys, who have listed Burnside as an influence on their music.