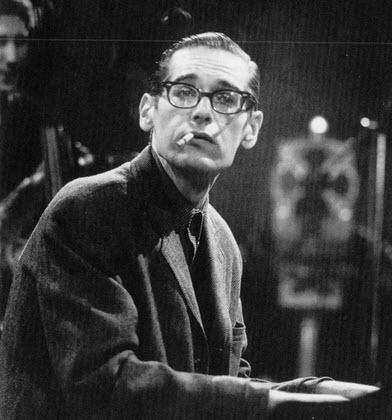 William John Evans, known as Bill Evans (August 16, 1929 – September 15, 1980), was an American jazz pianist and composer who mostly worked in a trio setting.

Evans’s use of impressionist harmony, inventive interpretation of traditional jazz repertoire, block chords, and trademark rhythmically independent, “singing” melodic lines influenced a generation of pianists; he was considered by some to be the most influential post-World War II jazz pianist. Unlike many other jazz musicians of his time, Evans never embraced new movements like jazz fusion or free jazz. “Perhaps it is a peculiarity of mine that despite the fact that I am a professional performer, it is true that I have always preferred playing without an audience.
~Bill Evans

In 1955, he moved to New York, where he worked with bandleader and theorist George Russell. In 1958, Evans joined Miles Davis’s sextet, where he was to have a profound influence. In 1959, then immersed in modal jazz, he recorded Kind of Blue, the best-selling jazz album of all time. Bill had this quiet fire that I loved on piano.
The way he approached it, the sound he got was like
crystal notes or sparkling water cascading down
from some clear waterfall. I had to change the way
the band sounded again for Bill’s style by playing
different tunes, softer ones at first.
~Miles Davis

In late 1959, Evans left the Miles Davis band and began his career as a leader with Scott LaFaro and Paul Motian, a group now regarded as a seminal modern jazz trio. In 1961, ten days after recording the highly acclaimed Sunday at the Village Vanguard and Waltz for Debby, LaFaro died in a car accident. After months of seclusion, Evans re-emerged with a new trio, featuring bassist Chuck Israels. In 1963, Evans recorded Conversations with Myself, an innovative solo album using the unconventional (in jazz solo recordings) technique of overdubbing over himself. In 1966, he met bassist Eddie Gomez, with whom he would work for eleven years. Several successful albums followed, such as Bill Evans at the Montreux Jazz Festival, Alone and The Bill Evans Album, among others. In 1973, he married Nenette Zazzarra, with whom he had a son, Evan. The younger Evans would become a film composer.

Despite his success as a jazz artist, Evans’ suffered personal loss and struggled with drug abuse. Both his girlfriend Elaine and his brother Harry committed suicide, and he was a long time heroin user, and later cocaine. As a result, his financial stability, personal relationships and musical creativity suffered until his death, in 1980.

Many of his compositions, such as “Waltz for Debby”, have been become standards and have been played and recorded by many artists. Evans was honored with 31 Grammy nominations and seven awards, and was inducted in the Down Beat Jazz Hall of Fame.