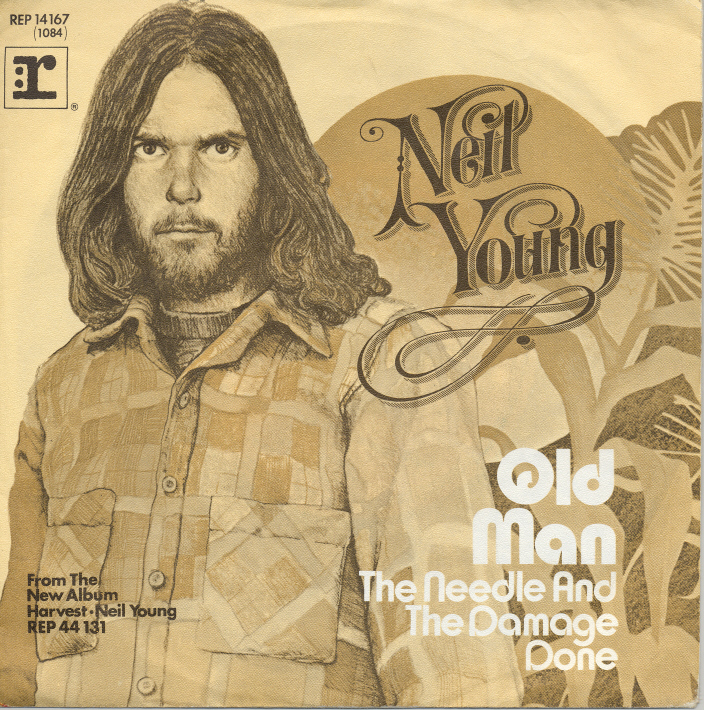 “Old Man” was one of the highlights of Neil Young’s Harvest album, with a haunting melody strong enough to have made it a good choice as a single. It was indeed released as a single in 1972, but it made only #31, possibly because it came just a few months after the chart-topping “Heart of Gold,” which might have blunted its commercial impact a bit. Nevertheless, it got mucho airplay on FM radio and is one of Young’s more familiar songs, especially to those who prefer the more gentle singer-songwriting face of his work. ..
~Richie Unterberg (allmusic.com)

Old Man is a song written and performed by Neil Young on his 1972 album Harvest. “Old Man” was released as a single on Reprise Records in the spring of 1972, and reached no. 31 on the Billboard Hot 100 singles chart for the week ending June 3. The song was written for the caretaker of the Northern California Broken Arrow Ranch, which Young purchased for $350,000 in 1970. The song compares a young man’s life to an old man’s and shows that the young man has, to some extent, the same needs as the old one. James Taylor played six-string banjo (tuned like a guitar) and sang on the song, and Linda Ronstadt also contributed vocals.

About that time when I wrote (“Heart of Gold”), and I was touring, I had also — just, you know, being a rich hippie for the first time — I had purchased a ranch, and I still live there today. And there was a couple living on it that were the caretakers, an old gentleman named Louis Avila and his wife Clara. And there was this old blue Jeep there, and Louis took me for a ride in this blue Jeep. He gets me up there on the top side of the place, and there’s this lake up there that fed all the pastures, and he says, “Well, tell me, how does a young man like yourself have enough money to buy a place like this?” And I said, “Well, just lucky, Louie, just real lucky.” And he said, “Well, that’s the darndest thing I ever heard.” And I wrote this song for him.
~Neil Young (in the movie Heart of Gold)

Old man look at my life,
Twenty four
and there’s so much more
Live alone in a paradise
That makes me think of two.

Love lost, such a cost,
Give me things
that don’t get lost.
Like a coin that won’t get tossed
Rolling home to you.

Old man take a look at my life
I’m a lot like you
I need someone to love me
the whole day through
Ah, one look in my eyes
and you can tell that’s true.

I’ve been first and last
Look at how the time goes past.
But I’m all alone at last.
Rolling home to you.

Old man take a look at my life
I’m a lot like you
I need someone to love me
the whole day through
Ah, one look in my eyes
and you can tell that’s true.