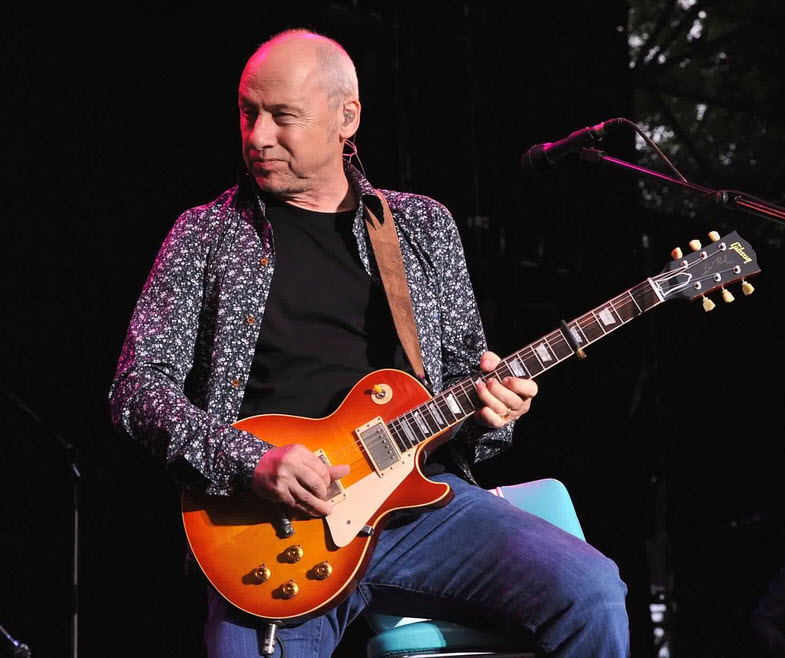 …. Actually we are soul mates. As far as guitar playing goes he never steps all over with fancy licks. Yeah, Mark was incredible. He helped make this record in a thousand ways, not only musically, which in itself would have been enough. Brilliant guy, I can’t say enough about him.
~Bob Dylan (Talking about Knopfler part in the making of “Infidels” – July 1983 to Martin Killer)

The most celebrated British guitar hero to emerge in the 1970s and ’80s, Mark Knopfler rose to fame as the leader of Dire Straits, and his songwriting and incisive guitar work played a decisive role in making them an international success story. At a time when punk and new wave were making technique for its own sake seem irrelevant, and metal was taking the guitar solo in noisier and unpredictable directions, Knopfler’s clean but dexterous picking proved there was still room for traditionalism and chops in mainstream rock & roll.
~Mark Deming (allmusic.com)

Mark Freuder Knopfler, OBE (born 12 August 1949) is a British songwriter, film score composer, guitarist, and record producer. He is best known as the lead guitarist, vocalist, and songwriter for the rock band Dire Straits, which he co-founded with his brother, David Knopfler, in 1977.

After Dire Straits disbanded in 1995, Knopfler went on to record and produce seven solo albums, and, as with his previous tenure, produced many hit songs. He has composed and produced film scores for eight films, including Local Hero (1983), Cal (1984), The Princess Bride (1987), and Wag the Dog (1997).

In addition to his work with Dire Straits and as a solo artist and composer, Knopfler has recorded and performed with many prominent musicians, including Chet Atkins, Chris Botti, The Chieftains, Eric Clapton, Bob Dylan, Bryan Ferry,Emmylou Harris, Jools Holland, Sonny Landreth, Van Morrison, Steely Dan, Sting, and James Taylor, sometimes working as a session musician. He has produced albums for Tina Turner, Bob Dylan, and Randy Newman.

Knopfler is a fingerstyle guitarist and was ranked 27th on Rolling Stone magazine’s list of 100 Greatest Guitarists of All Time. Knopfler and Dire Straits have sold in excess of 120 million albums to date. A four-time Grammy Award winner, Knopfler is the recipient of the Edison Award, the Steiger Award and the Ivor Novello Award, as well as holding three honorary doctorate degrees in music from universities in the United Kingdom. And to round of with grace, here is the best performance Mark Knopfler has ever been a part of IMHO: