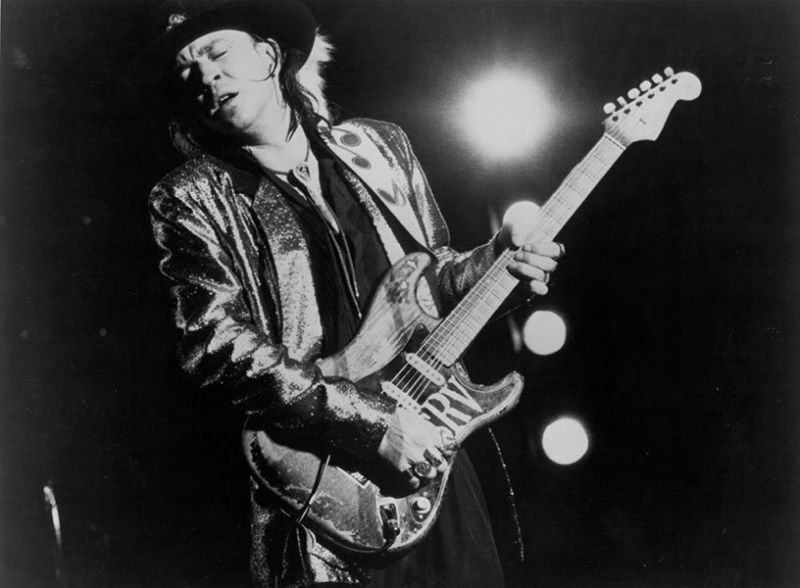 But between sets I’d sneak over to the black places to hear blues musicians. It got to the point where I was making my living at white clubs and having my fun at the other places.
~Stevie Ray Vaughan

He was the greatest blues guitarist of his generation.
~ Mick Jagger

Stevie was always playing. After he’d get offstage, he’d get on his bus. And he had all these Stratocasters hanging there. He’d grab one and start goin’.
~Gregg Allman

Stephen “Stevie” Ray Vaughan (October 3, 1954 – August 27, 1990) was an American guitarist, singer-songwriter, and record producer. Often referred to by his initials SRV, Vaughan is best known as a founding member and leader of Double Trouble. Together with drummer Chris Layton and bassist Tommy Shannon, they ignited the blues revival of the 1980s. With a career spanning seven years, Vaughan and Double Trouble consistently sold out concerts while their albums frequently went gold. I remember when he first came out, he was doing that Hendrix song [Voodoo Chile], and I heard all these people going, “Ah, he’s just trying to do Hendrix. But he went a lot further than that. He was absolutely 100-proof, pure blues. Albert Collins, Muddy Waters – the essence of that was in everything he played. More than the Allman Brothers, he was straight-down-the-line blues.
~Gregg Allman