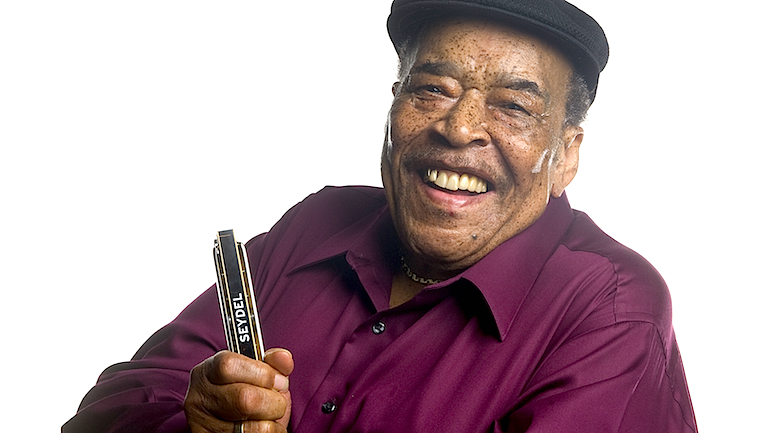 Distinctive wail…fat-toned style. Sheer propulsive power…Cotton can drive a song with his harp, squeezing out a flurry of notes. His true genius is his ability to select the perfect note. Cotton is a virtuoso of the blues.
– Blues Revue

James Henry Cotton (July 1, 1935 – March 16, 2017) was an American blues harmonica player, singer and songwriter, who performed and recorded with many of the great blues artists of his time and with his own band. He played drums early in his career but is famous for his harmonica playing.

Cotton began his professional career playing the blues harp in Howlin’ Wolf‘s band in the early 1950s.[3] He made his first recordings in Memphis for Sun Records, under the direction of Sam Phillips. In 1955, he was recruited by Muddy Waters to come to Chicago and join his band. Cotton became Waters’s bandleader and stayed with the group until 1965.[4] In 1965 he formed the Jimmy Cotton Blues Quartet, with Otis Spann on piano, to record between gigs with the Muddy Waters band. He eventually left to form his own full-time touring group. His first full album, on Verve Records, was produced by the guitarist Mike Bloomfield and the singer and songwriter Nick Gravenites, who later were members of the band Electric Flag.