I Love You, Honeybear is the second studio album released by American folk musician Josh Tillman under his pseudonym Father John Misty. It was released on February 9, 2015 in the UK and Europe on Bella Union, and in the rest of the world on February 10, 2015 on Sub Pop. Produced by both Tillman and Jonathan Wilson, this is Tillman’s second studio album since his departure from Fleet Foxes. The album was also mixed by Phil Ek, and mastered by Greg Calbi at Sterling Sound. According to Tillman, the release is a concept album.

“It achieves beauty without ever forgetting the complications that come with that beauty. Tillman can sing about sex and anxiety and death-fear with sweeping cinematic panache. He can make low feelings sound high, and he can make high feelings sound like grand romantic visions. “
– Stereogum

Ok, so it is a performance, a theatrical act, but that doesn’t make it less honest. Sometimes we see truth through art and make belive, and the melodies, man, the melodies are wonderful!

Set list:
I Love You, Honeybear
Strange Encounter
True Affection
Only Son of the Ladiesman
When You’re Smiling and Astride Me
The Night Josh Tillman Came To Our Apartment
I’m Writing a Novel
Chateau Lobby #4 (in C for Two Virgins)
Bored in the USA
Nothing Good Ever Happens at the Goddam Thirsty Crow
Hollywood Forever Cemetery Sings
The Ideal Husband 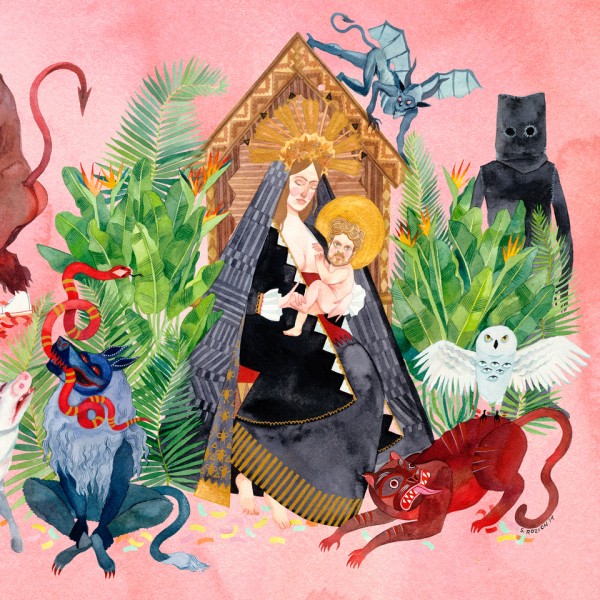 I Love You, Honeybear was recorded all through 2013 to 2014 in Los Angeles with producer Jonathan Wilson, who I also recorded and produced 2012’s Fairly Fun with. There’s a case to be made that it sounds and acts a bit like solo-era John Lennon, Scott Walker, Randy Newman, Harry Nilsson, and Dory Previn, while taking more than a few cues from Woody Allen, Kurt Vonnegut, Alejandro Jodorowsky and Muhammad Ali. It has a decidedly more soulful presence than Fear Fun, due in no small part to the fact that I am truly singing my ass off all over this motherfucker. The album is really characterized by the scope and ambition of the arrangements. Nearly every tune is augmented by something special, be it orchestral strings, a mariachi band, questionable electronic drum solos, ragtime jazz combos, soul singers, or what have you. I’m pretty sure there’s a sitar in there somewhere. Blammo.

“I Love You, Honeybear is a concept album about a guy named Josh Tillman who spends quite a bit of time banging his head against walls, cultivating weak ties with strangers and generally avoiding intimacy at all costs. This all serves to fuel a version of himself that his self-loathing narcissism can deal with. We see him engaging in all manner of regrettable behavior.
– Father John Misty