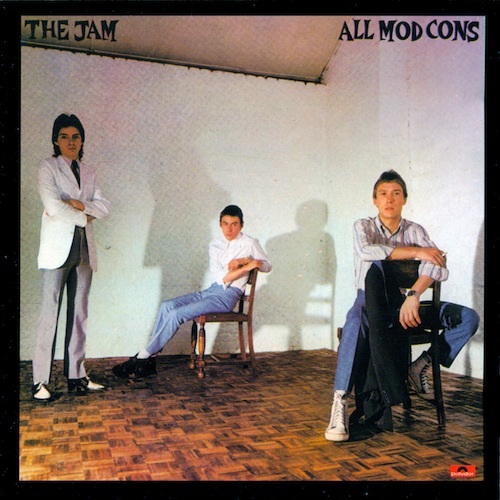 “All Mod Cons, released to wide acclaim in 1978, firmly cemented the group’s rise to extraordinary heights. Indeed, for many it was the first essential Jam album and listening to it now its impact has not diminished over time.”
-BBC

When I think about English records I think of  The Kinks’ The Village Green Preservation Society, The Smiths’ The Queen is Dead, The Who’s Quadrophenia and The Jam’s All Mod Cons. To me all those albums are quintessential English.

All of them are fantastic albums.

It’s their third full-length LP. It took it’s title from a British idiom one might find in housing advertisements, is short for “all modern conveniences” and is a pun on the band’s association with the mod revival as well. Of Course it is also Paul Weller’s view on the music business as a ‘con’.

The single “Down in the Tube Station at Midnight” was one of the band’s most successful chart hits up to that point, peaking at #15 on the UK charts. In 2000, Q magazine placed All Mod Cons at number 50 in its list of the 100 Greatest British Albums Ever. I think it is The Jams most fully realised album, it is their best album.

British Invasion pop influences run through the album, most obviously in the cover of The Kinks’ David Watts and It’s too bad a song The Who would have been proud of.

To Be Someone (Didn’t we have a nice) time is an early jab at the rock’n roll lifestyle, about the hollow and empty life of a star, supposedly written after a horrible tour pairing in America with Blue Oyster Cult. The Bass line is a cool rip-of of Paul McCartneys bass line to “Taxman”.

I’ve highlighted my favourite tracks, but all the tracks are really strong, great playing and great singing all around. The Production is unusually complex and sophisticated for a punk/new wave album.

To Be Someone/David Watts (Rockpalast 1978):

The song “Down in the Tube Station at Midnight” is a first-person narrative of a young man who walks into a tube station on the way home to his wife, and is beaten by far right thugs. The lyrics of the song “All Mod Cons” criticise fickle people who attach themselves to people who enjoy success and leave them once that is over.

Down in the Tube Station at Midnight (official Video):

The Jam regrouped and refocused for All Mod Cons, an album that marked a great leap in songwriting maturity and sense of purpose. For the first time, Paul Weller built, rather than fell back, upon his influences, carving a distinct voice all his own; he employed a story-style narrative with invented characters and vivid British imagery à la Ray Davies to make incisive social commentary — all in a musically irresistible package. The youthful perspective and impassioned delivery on All Mod Cons first earned Weller the “voice of a generation” tag, and it certainly captures a moment in time, but really, the feelings and sentiments expressed on the album just as easily speak to any future generation of young people. Terms like “classic” are often bandied about, but in the case of All Mod Cons, it is certainly deserved.