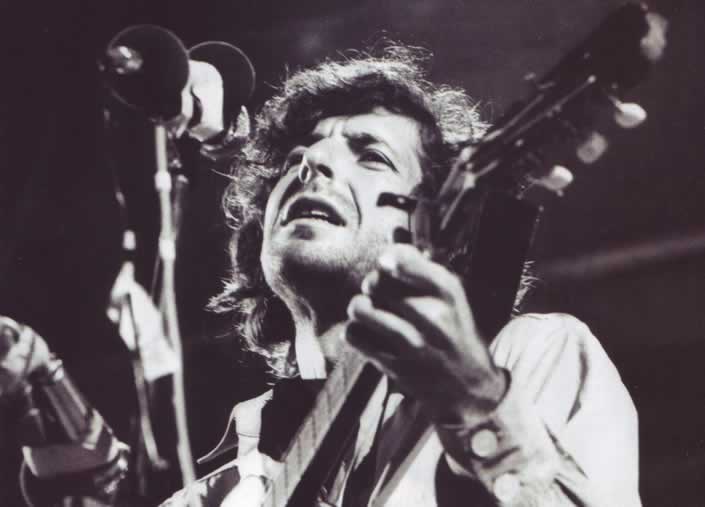 Tension had been rising at the festival for days. The promoters had expected a hundred and fifty thousand people but half a million more turned up, many with no intention of paying. Even after the promoters were forced to declare it a free festival, ill will remained. During a set by Kris Kristofferson, bottles were thrown and he was booed offstage. “They were booing everybody,” says Kristofferson. “Except Leonard Cohen.”
~Sylvie Simmons

First off some facts from wikipedia:

The 1970 Isle of Wight Festival was held between 26 and 31 August 1970 at East Afton Farm an area on the western side of the Isle of Wight. It was the last of three consecutive music festivals to take place on the island between 1968 and 1970 and widely acknowledged as the largest musical event of its time, greater than the attendance of Woodstock. Although estimates vary, the Guinness Book of Records estimated 600,000, possibly 700,000 people attended. It was organised and promoted by local brothers, Ronnie, Ray and Bill Foulk. Ron Smith was site manager and Rikki Farr acted as compere.

The preceding Isle of Wight Festivals, also promoted by the Foulks, had already gained a good reputation in 1968 and 1969 by featuring acts such as Jefferson Airplane, T. Rex, The Move, The Pretty Things, Joe Cocker, The Moody Blues (performed at the 1969 festival), The Who, and Bob Dylan in his first performance since his 1966 motorcycle accident.

The 1970 version, following Woodstock in the previous year, set out to move one step forward and enlisted Jimi Hendrix. With Hendrix confirmed, artists such as Chicago, The Doors, Lighthouse, The Moody Blues, The Who, Miles Davis, Joan Baez, Joni Mitchell, Jethro Tull, Sly & the Family Stone, Ten Years After, Emerson, Lake & Palmer and Free willingly took up the chance to play there. The event had a magnificent but impractical site, since the prevailing wind blew the sound sideways across the venue, and the sound system had to be augmented by Pink Floyd’s PA. There was a strong, but inconsistent line up, and the logistical nightmare of transporting some 600,000 people onto an island with a population of fewer than 100,000.

Political and logistical difficulties resulted in the organisers eventually realising that the festival would not make a profit and declaring it to be “a free festival”, although the majority of the audience had paid for tickets in advance, and the event was filmed contemporaneously. The commercial failings of the festival ensured it was the last event of its kind on the Isle of Wight for thirty-two years.