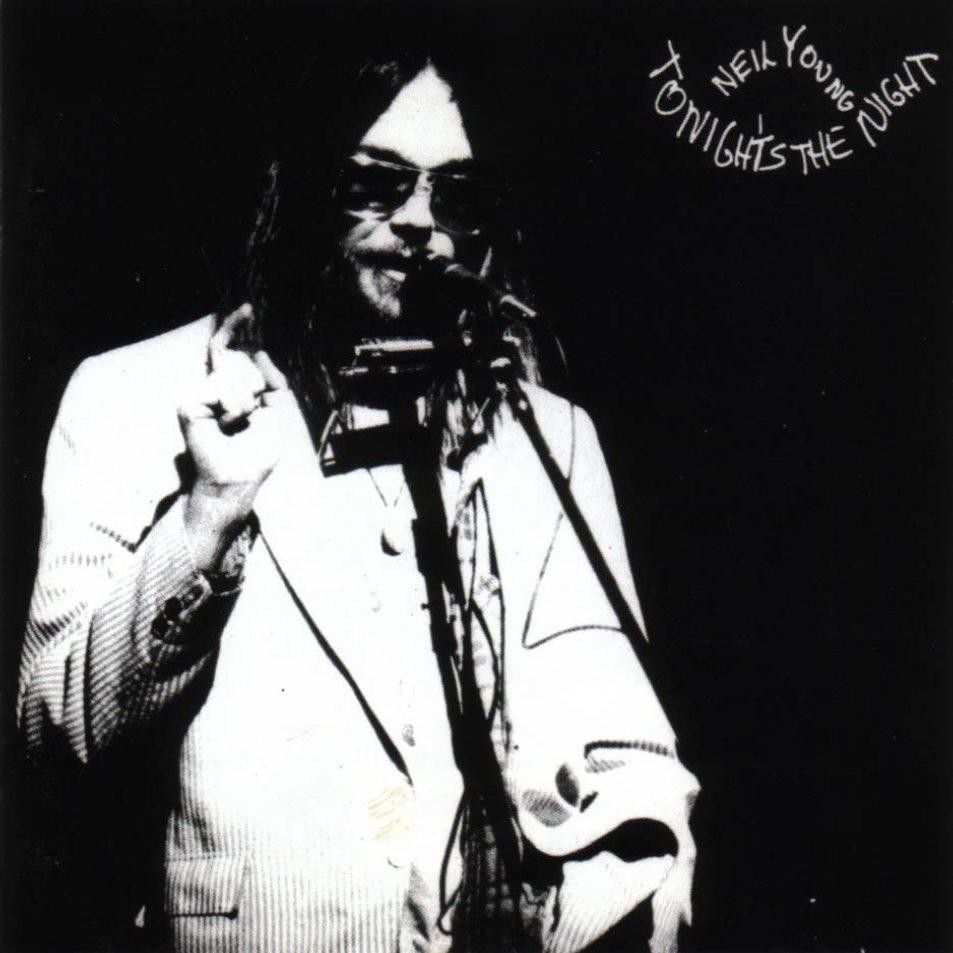 “The record chronicles the post-hippie, post-Vietnam demise of counterculture idealism, and a generation’s long, slow trickle down the drain through drugs, violence, and twisted sexuality. This is Young’s only conceptually cohesive record, and it’s a great one.”
~Dave Marsh (The New Rolling Stone Record Guide -August 28, 1975)

“Tonight’s the Night is that one rare record I will never tire of.”
~Chris Fallon (PopMatters)

Tonight’s the Night is the sixth studio album by Canadian musician Neil Young, released in 1975 on Reprise Records, catalogue MS 2221. It was recorded in 1973 (most of it on a single day, August 26), its release delayed for two years. It peaked at #25 on theBillboard 200. In 2003, the album was ranked number 331 on Rolling Stone magazine’s list of the 500 greatest albums of all time. Roll Another Number (For the road):

Tonight’s the Night is a direct expression of grief. Crazy Horse guitarist Danny Whitten and Young’s friend and roadie Bruce Berry had both died of drug overdoses in the months before the songs were written. The title track mentions Berry by name, while Whitten’s guitar and vocal work highlight “Come on Baby Let’s Go Downtown”; the latter was recorded live in 1970. The song would later appear, unedited, on a live album from the same concerts, Live at the Fillmore East, with Whitten credited as the sole author.

Fans have long speculated that an alternate version of Tonight’s the Night exists. Neil Young’s father, Scott Young, wrote of it in his memoir, Neil and Me:

Ten years after the original recording, David Briggs and I talked about Tonight’s the Night, on which he had shared the producer credit with Neil. At home a couple of weeks earlier he had come across the original tape, the one that wasn’t put out. “I want to tell you, it is a handful. It is unrelenting. There is no relief in it at all. It does not release you for one second. It’s like some guy having you by the throat from the first note, and all the way to the end.” After all the real smooth stuff Neil had been doing, David felt most critics and others simply failed to read what they should have into Tonight’s the Night — that it was an artist making a giant growth step. Neil came in during this conversation, which was in his living room. When David stopped Neil said, “You’ve got that original? I thought it was lost. I’ve never been able to find it. We’ll bring it out someday, that original.”

Here is “Roll Another Number” (unreleased from the Acetate tape): Tonight’s the Night (unreleased – from the acetate tape):

This should end any lingering doubts as to whether the real Neil Young is the desperate recluse who released two albums in the late ’60s or the sweet eccentric who became a superstar shortly thereafter. Better carpentered than Time Fades Away and less cranky than On the Beach, it extends their basic weirdness into a howling facedown with heroin and death itself. It’s far from metal machine music–just simple, powerful rock and roll. But there’s lots of pain with the pleasure, as after all is only “natural.” In Boulder, it reportedly gets angry phone calls whenever it’s played on the radio. What better recommendation could you ask? A
~Robert Christgau (robertchristgau.com)

All songs written and composed by Neil Young, except when noted.