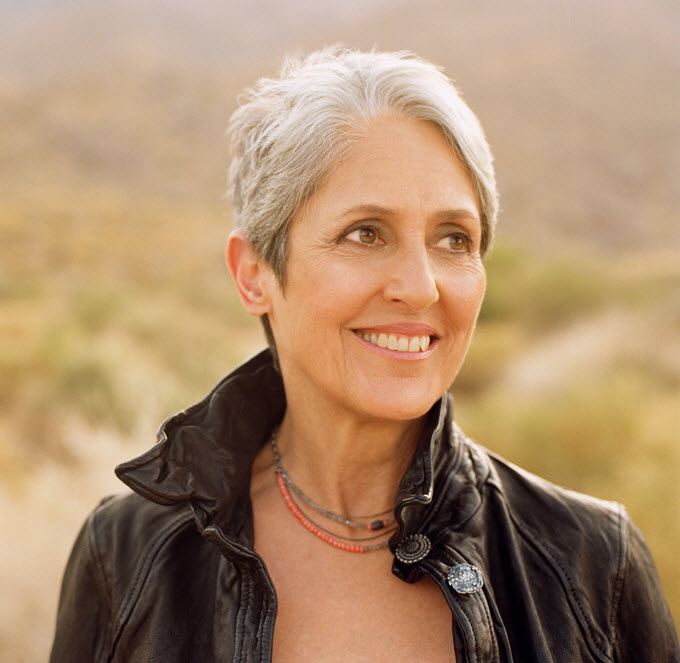 And Joan Baez means more to me than 100 of these singers around today. She’s more powerful. That’s what we’re looking for. That’s what we respond to. She always had it and always will, power for the species, not just for a select group.
~Bob Dylan (to Neil Hickey, Sept. 1976)

“I’ve never had a humble opinion. If you’ve got an opinion, why be humble about it?”
― Joan Baez

I went to jail for 11 days for disturbing the peace; I was trying to disturb the war.
~Joan Baez (Pop Chronicles interview – 1967)

Baez has a distinctive vocal style, with a strong vibrato. Her recordings include many topical songs and material dealing with social issues.

Baez began her career performing in coffeehouses in Boston and Cambridge, and rose to fame as an unbilled performer at the 1959 Newport Folk Festival. She began her recording career in 1960, and achieved immediate success. Her first three albums, Joan Baez, Joan Baez, Vol. 2, and Joan Baez in Concert all achieved gold record status, and stayed on the charts of hit albums for two years. Baez has had a popular hit song with “Diamonds & Rust” and hit covers of Phil Ochs’s “There but for Fortune” and The Band’s “The Night They Drove Old Dixie Down”. Other songs associated with Baez include “Farewell, Angelina”, “Love Is Just a Four-Letter Word”, “Joe Hill”, “Sweet Sir Galahad” and “We Shall Overcome”. She performed three of the songs at the 1969 Woodstock Festival, helped to bring the songs of Bob Dylan to national prominence, and has displayed a lifelong commitment to political and social activism in the fields of nonviolence, civil rights, human rights and the environment.

The Night They Drove Old Dixie Down:

Baez has performed publicly for over 53 years, releasing over 30 albums. Fluent in Spanish as well as in English, she has also recorded songs in at least six other languages. She is regarded as a folk singer, although her music has diversified since the 1960s, encompassing everything from folk rock and pop to country and gospel music. Although a songwriter herself, Baez is generally regarded as an interpreter of other people’s work, having recorded songs by The Allman Brothers Band, The Beatles, Jackson Browne,Bob Dylan, Violeta Parra, Woody Guthrie, The Rolling Stones, Pete Seeger, Paul Simon, Stevie Wonder, Leonard Cohen, and many others. In recent years, she has found success interpreting songs of modern songwriters such as Ryan Adams, Josh Ritter, Steve Earle and Natalie Merchant.