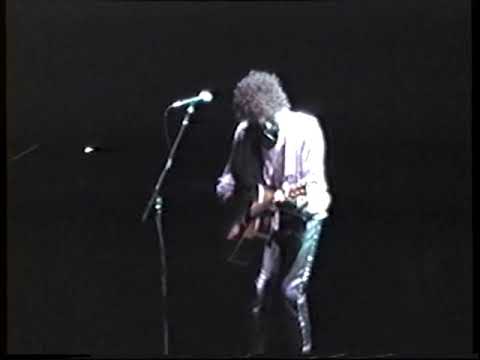 Dylan gets downright talkative at this show, joking about New Jersey being ‘The land of The Boss’. He ends ‘Like A Rolling Stone’ with what sounds like a parody of the stop-start ending of Springsteen’s ‘Born In The USA’. .. Before the encore a guitar-shaped birthday cake is carted onstage for Howard Epstein, while everyone sings ‘Happy Birthday’, including Al Kooper, sitting in on piano during the latter part of the show.
~Clinton Heylin (A Life In Stolen Moments)

Is it past anybody’s bed time? Ha-ha, it’s past mine. I should have been in bed hours ago. Ha-ha-ha. OK it’s Tom Petty and the Heartbreakers right here. Benmont Tench playing the keyboards. Come on right up against that, … right up against that, fence whatever it is. Yeah, you can come on right up on stage now if you want to. Lead guitar player, Michael Campbell. One of the best guitar players around. Stan Lynch, one of the finest drummers in all the USA. I know, born in the USA. Well were we all born in the USA, anybody here who wasn’t born in the USA? I’d like to meet them. OK, we’re gonna sing Happy Birthday right now. We’re gonna sing Happy Birthday to the bass guitar player in this band. His name is Howie Epstein. Now you sing all those words what you want, but you sing it. What key we gonna sing it in? He’s gonna chose the key himself, it’s his birthday.
OK, we’re gonna go on with some serious business. Also you know I have my own Heartbreakers now. I can’t …, I wanna introduce them to you now. That’s Louise Bethune and Madelyn Quebec. Carolyn Dennis and Queen Esther Marrow. All right, now anybody else out there wanna be introduced? What’s your name? I’ll introduce you! Ha-ha-ha-ha. All right now, we’re gonna play this song. I recorded this song over 25, 30 years ago. I can’t remember when. Anyway, I don’t know where that band is now, that recorded that song with me. But one of the guys is here, he played the keyboards on that particular song, that night. His name is Al Kooper, I want you to give him a big hand now. Ha-ha ha. Anything you wanna say Al? I like this place I really do, I been here before and I hope I’ll be here again.
~Bob Dylan – (before Like A Rolling Stone)