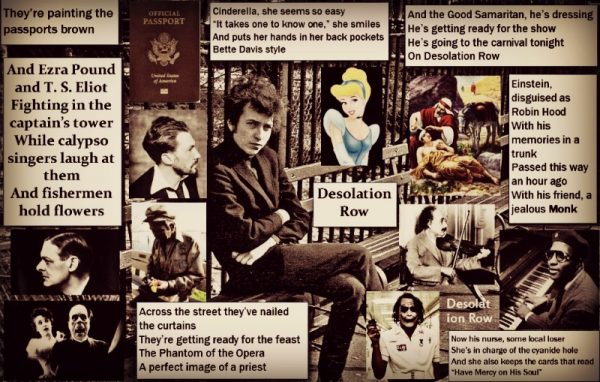 When you asked how I was doing
Was that some kind of joke?
All these people that you mention
Yes, I know them, they’re quite lame
I had to rearrange their faces
And give them all another name
~Desolation Row 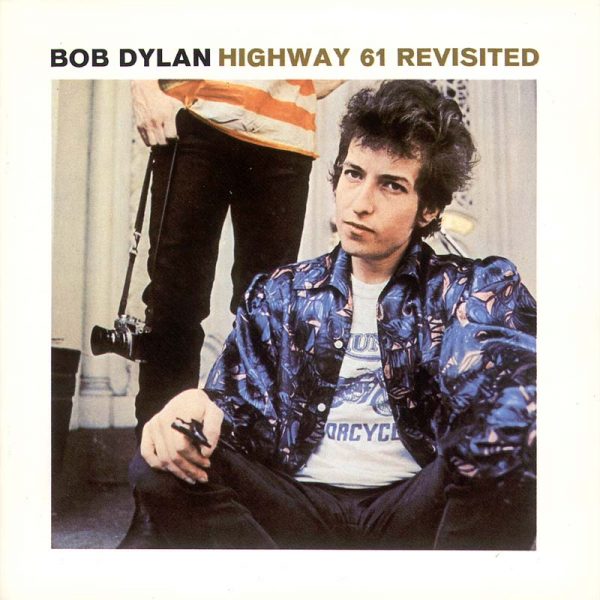 “Desolation Row” is a 1965 song written and sung by Bob Dylan. It was recorded on August 4, 1965 and released as the closing track of Dylan’s sixth studio album, Highway 61 Revisited. It has been noted for its length (11:21) and surreal lyrics in which Dylan weaves characters from history, fiction, the Bible and his own invention into a series of vignettes that suggest entropy and urban chaos.

That Dylan seriously considered using the electric take is confirmed by the existence of a test-pressing of all the songs on his shortlist, presumably cut at the end of the August 2 session. One must presume it was for Dylan’s own benefit, allowing him to decide which songs and
sequence to go with.
~Clinton Heylin (Revolution in the Air: The Songs of Bob Dylan, 1957-1973)

So at the end of another extraordinarily productive session on August 2, he cut the song acoustically, allowing producer Bob Johnston to overdub some flamenco guitar fills (which may or may not have been provided by Bloomfield or Charlie McCoy) at a session two days later, before editing together the released version from four incomplete takes and the only complete take.
~Clinton Heylin (Revolution in the Air: The Songs of Bob Dylan, 1957-1973)

There is still a fair amount of confusion, in various writings about “Desolation Row,” over who played second guitar, with some claiming Bloomfield and others Bruce Langhorne. Bob Johnston and Al Kooper are clear on this point, as is the guitarist himself, as are the album credits, as is the playing style: it was Charlie McCoy, end of debate.
~Mark Polizzotti (Bob Dylan’s Highway 61 Revisited (33 1/3))

Here is the Forest Hill 1965 version:

And here the Auckland 2018 version:

Bob Dylan: As I look back on it now, I am surprised that I came up with so many of them. At the time it seemed like a natural thing to do. Now I can look back and see that I must have
written those songs “in the spirit,” you know? Like “Desolation Row” – I was just thinkin’ about that the other night. There’s no logical way that you can arrive at lyrics like that. I don’t know how it was done.
KL: It just came to you?
BD: It just came out through me.
~Bob Dylan – Kurt Loder interview, Oct 1987

“And Desolation Row? That’s a minstrel song through and through. I saw some ragtag minstrel show in blackface at the carnivals when I was growing up, and it had an effect on me, just as much as seeing the lady with four legs.”
~Bob Dylan to Edna Gundersen Sept 2001

“Desolation Row” also focuses on scene, but in a more purposeful way: the images build up powerfully, propelled by the vocal and instrumental performances. The song makes a statement: this scene is important, it needs·to be paid attention to, there is a reality in this life which may not be cheerful but which, once discovered, shows everything else to be a pose. Desolation Row” is an anthem; it proclaims and forever defines a certain place, certain state of being… ..And finally I can say about “Desolation Row” only that I am in awe of it.
~Paul Williams (Bob Dylan Performing Artist I: The Early Years 1960-1973)

What does one do the month after inventing an entirely new form of popular song? One does it again. With “Desolation Row,” Dylan manages something even he’d never pulled off before—writing a song as long as “Tam Lin” (and in that classic ballad meter) but without any such narrative thread. Instead, Dylan relies almost solely on placing familiar characters
in disturbingly unfamiliar scenarios, revealing a series of increasingly disturbing canvases. Being Dylan, he unravels no ordinary tale.
~Clinton Heylin (Revolution in the Air: The Songs of Bob Dylan, 1957-1973)

Part of the inspiration (and title) might also have come from Steinbeck’s Cannery Row (an early Dylan enthusiasm), and some of it was almost surely derived from Kerouac’s Desolation Angels. But as with Juarez, the New York that the narrator has gone back to for this final song is a city of the mind, one that encompasses all of Dylan’s Highway 61 and the terrain surrounding it, a funhouse America that is everywhere and nowhere.
~Mark Polizzotti (Bob Dylan’s Highway 61 Revisited (33 1/3))

“Desolation Row” is the soundtrack to an imaginary western, with its sepia tones, flimsy prop saloons, and corpses in the dust. Dylan was a fan of such westerns in his youth, a watcher of shows like Wagon Train, Rawhide, and Gunsmoke (whose sheriff Matt Dillon is a more likely inspiration for the famous name change than Dylan Thomas). Their sadness is one that reaches through the years, into the deepest, smallest, most frightened core of the self, where one’s fears, hopes, and anxiety live. In “Desolation Row,” Dylan dredges up all the haunting visions and ghosts of childhood and adulthood, the monsters that ones lived in his closet and now populated his dreams. By setting it to a musical motif so rich in resonance for those who, like him, grew up with the cowboy myths, he found a sound to match his night terrors, and it can send chills up the spine.”Laredo was a sinister town,” Kerouac wrote in On The Road. “It was the bottom of the dregs of America where all the heavy villains sink, where disoriented people have to go to be near a specific elsewhere they can slip into unnoticed.” This is the Wild West from which “Desolation Row” is fashioned. In the end, this is where Highway 61 leads.
~Mark Polizzotti (Bob Dylan’s Highway 61 Revisited (33 1/3))

Cinderella, she seems so easy
“It takes one to know one,” she smiles
And puts her hands in her back pockets
Bette Davis style
And in comes Romeo, he’s moaning
“You Belong to Me I Believe”
And someone says, “You’re in the wrong place my friend
You better leave”
And the only sound that’s left
After the ambulances go
Is Cinderella sweeping up
On Desolation Row

Now the moon is almost hidden
The stars are beginning to hide
The fortune-telling lady
Has even taken all her things inside
All except for Cain and Abel
And the hunchback of Notre Dame
Everybody is making love
Or else expecting rain
And the Good Samaritan, he’s dressing
He’s getting ready for the show
He’s going to the carnival tonight
On Desolation Row

Now Ophelia, she’s ’neath the window
For her I feel so afraid
On her twenty-second birthday
She already is an old maid
To her, death is quite romantic
She wears an iron vest
Her profession’s her religion
Her sin is her lifelessness
And though her eyes are fixed upon
Noah’s great rainbow
She spends her time peeking
Into Desolation Row

Einstein, disguised as Robin Hood
With his memories in a trunk
Passed this way an hour ago
With his friend, a jealous monk
He looked so immaculately frightful
As he bummed a cigarette
Then he went off sniffing drainpipes
And reciting the alphabet
Now you would not think to look at him
But he was famous long ago
For playing the electric violin
On Desolation Row

Dr. Filth, he keeps his world
Inside of a leather cup
But all his sexless patients
They’re trying to blow it up
Now his nurse, some local loser
She’s in charge of the cyanide hole
And she also keeps the cards that read
“Have Mercy on His Soul”
They all play on pennywhistles
You can hear them blow
If you lean your head out far enough
From Desolation Row

Praise be to Nero’s Neptune
The Titanic sails at dawn
And everybody’s shouting
“Which Side Are You On?”
And Ezra Pound and T. S. Eliot
Fighting in the captain’s tower
While calypso singers laugh at them
And fishermen hold flowers
Between the windows of the sea
Where lovely mermaids flow
And nobody has to think too much
About Desolation Row

Yes, I received your letter yesterday
(About the time the doorknob broke)
When you asked how I was doing
Was that some kind of joke?
All these people that you mention
Yes, I know them, they’re quite lame
I had to rearrange their faces
And give them all another name
Right now I can’t read too good
Don’t send me no more letters, no
Not unless you mail them
From Desolation Row
–

He has remained pretty loyal to the original lyrics, only minor variations has occurred. Only thing off course is that the full ten verse original are long gone, he usually gives us 5-8 verses.