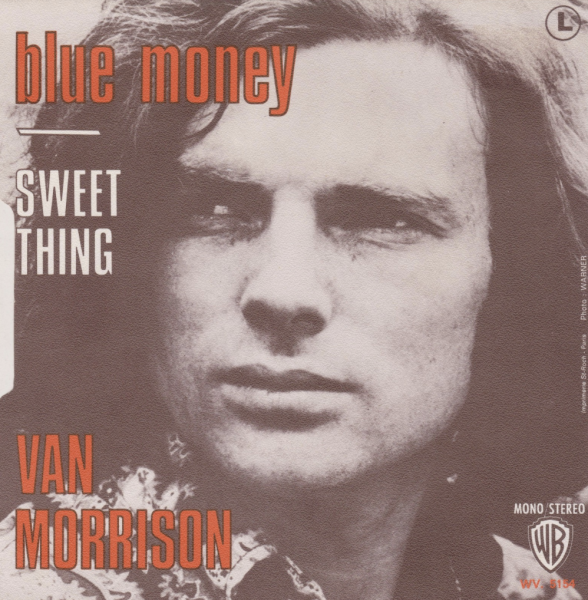 Released on his second studio album Astral Weeks (1968). It was on the first side of the album, that was under the heading: In the Beginning. The song was later used in 1971 as the American B-side to Morrison’s single “Blue Money“.

“Sweet Thing” was written by Morrison, aged c.22-23, after he had met his future wife Janet while on tour in the US in 1966 and during the year of separation after he returned to Belfast.

It was recorded during the last Astral Weeks session on 15 October 1968, at Century Sound Studios in New York City with Lewis Merenstein as producer. It is the only song on the album that looks forward instead of backward:

Van Morrison described the song to Ritchie Yorke: “‘Sweet Thing’ is another romantic song. It contemplates gardens and things like that…wet with rain. It’s a romantic love ballad not about anybody in particular but about a feeling.

Here are the San Anselmo 1971 version:

And here the Bristow 2018 version:

After two and a half minutes, Davis seems to want to shut the song down. His bass makes a clacking sound, as if to put the brakes on the rhythm as everyone else rushes ahead; the brakes don’t hold. My my, my my, my mmm-my my, my my my, Morrison muses; he takes a breath, and in one of the highest points in a song made of high points—“And I will run my merry way and jump the hedges first,” is the first line; the image is so thrilling you never lose sight of it as the song moves on, and the singer never does stop jumping—he shifts into a higher gear. He finds an image that is as adult as the first is childlike, carrying specters the grown man cannot gainsay, an image that is less abandoned, more determined, but as much a sign of freedom, saying “And I will raise my hand up into the nighttime sky”—
And I will raise my hand up into the nighttime …
skyyyyyyyyyy
—and like the sound of the triangle, which is the song itself pausing for an instant to draw a breath, the moment of suspension is everything.
–> Greil Marcus – When That Rough God Goes Riding: Listening to Van Morrison

From its opening, strummed acoustic opening, `Sweet Thing’ lifts its face to the light, and the lyric reinforces this sense of renewal and of optimism. The `merry way’ which seemed somewhat melancholic in `Beside You’ is here shown to be an enlightened and enlightening one; the whole perspective shifts, as `Go on your merry way’ seems to infer some loss and regret and here `I will stroll the merry way’ swings the emotional polarities around, standing as evidence of renewal and refreshment. I am particularly fond of the line `It’s me, I’m dynamite, and I don’t know why, in which the lack of cunning or of self-consciousness is key to the mood of the whole album. The song’s meaning is somehow emphasised by its defiant fade, and its unwillingness to conclude and to stop growing. As the song disappears, it continues to climb, with Larry Fallon’s string arrangements here being particularly, intuitively sympathetic to the whole mood of the song. These overdubs, added a week later at Century Sound under the guidance of engineer Brooks Arthur (whose studio it was, and who had engineered much of the Bang material), add much to the record as a whole: strings, horns, harpsichord. Morrison apparently seemed to have become more confident at these sessions, adding and suggesting more than at the time of the initial recording, Payne recalled.
–>Peter Mills – Hymns to the Silence – Inside the Words and Music of Van Morrison

…Over the endlessly descending, circular progression, Morrison sings positive lyrics about nature and a romantic partner, seemingly beginning in the middle of a thought: “And I will stroll the merry way.” The language is heightened, with its references to chariots and champagne eyes, and contains striking paradoxes, notably “And I will never grow so old again.” But the mood is positive, even giddy, in contrast to much of the rest of the album. Early in the second verse, a string quartet joins the proceedings, giving the song an even more effervescent feel. But “Sweet Thing” remains less a song in the usual sense than a musical meditation in which Van Morrison muses about certain images over a remarkable mélange of folk, blues, and jazz, some of it played with classical music instruments. You could say much the same about the rest of Astral Weeks, of course, but “Sweet Thing” is the only song on the album that looks forward instead of backward, and the only one that is celebratory, which may help explain why it was chosen by the compilers of The Best of Van Morrison to represent his most remarkable album.
–> William Ruhlmann (allmusic.com)