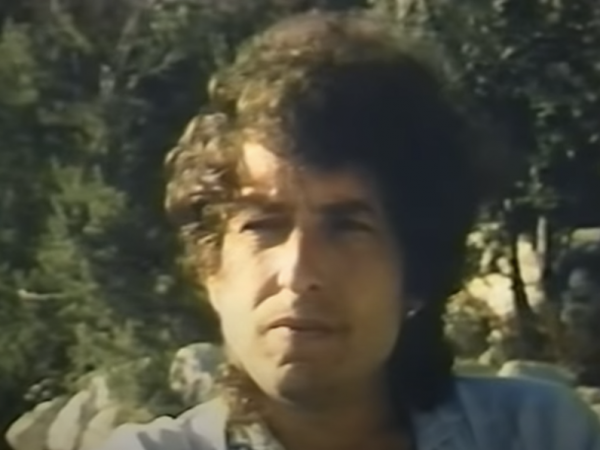 Bob Brown interviews Dylan for 20/20. Although a brief interview (the edited version), Brown asks some excellent questions, to which Dylan seems prepared to give full answers. He admits that he wasn’t very convinced by the message of “We Are the World.”
–Clinton Heylin (referring to the edited version of the interview)

Transcript from the edited version

BB: Do your children have some kind of an idea of what you meant?
BD: I think so, on some kind of level, but when I was growing up in the fifties, the thirties to me didn’t even exist. I just couldn’t imagine them in any kind of way. So I don’t suspect anybody growing up now will really understand what the sixties were all about.
BD: I used to think it was better if you just live and die and no-one knows who you are.
From the beginning Dylan, now 44 years old has shied away from publicity, granting few print interviews, never agreeing to a television network news interview until now. We spoke with him on a hillside on his estate in Malibu, California, where the wind blew in from the Pacific just below his house. Because the mythology surrounding Dylan has been so embroiled in change and controversy it was interesting to find him low key, cordial, soft spoken.
BB: Depending on how your music has evolved there have been people who have actually got angry because they felt it had changed. Did that ever bother you?
BD: Well, it’s always disappointing, you know, if when people, er, decide for one reason or another they don’t like your work any more. But, er… you know, it’s just one of those things. You can’t try to please people in that kind of a way because then you’d just, er, gonna be doing… er… you’ll never live it down, you know… it’ll just be… you know… always be dogging you around that you might be being a fake about the whole thing.
BB: So it’s sort of a no-win situation, I guess.
BD: It’s not important what other people call you, if you yourself know you’re a fake, that’s tougher to live with.
BB: Is protest song an accurate description of some of the things you were doing?
BD: Yeah, I guess so. But the real protest songs were written really in the thirties and forties, Which Side Are You On, mining type songs, union kind of songs. Er… that’s where the protest movement developed from. There’s still a strain of that type of thing in what I do, it’s just more broad now.
BB: Do you view the lyrics that you write as poetry?
BD: I always felt the need for that type of rhyme to say any type of thing that you wanted to say. But then again I don’t know if I call myself a poet or not. I would like to but I’m not really qualified, I don’t think, to make that decision. Because I come in on such a back door that… I don’t know what a, you know, Robert Frost or Keats or T.S. Eliot would really think of my stuff. It’s more of a visual type thing for me: I could picture the color of the song or the shape of it or who it is that I’m trying to appeal to in this song and what I’m trying to almost reinforce my feelings for. And I know that sounds sort of vague and abstract, but I’ve got a handle on it when I’m doing it.
BD: The phrasing I stumbled into. Some of the old folksingers used to phrase things in an interesting way… and then I got my style from seeing a lot of outdoor type poets who would recite their poetry. When you don’t have a guitar you recite things differently, and there used to be quite a few poets in the jazz clubs who would recite with a different type of attitude.
BD: Well, people can change things and make a difference… but there is a lot of false prophets around though. And… that’s the trouble, people say they think they know what’s right and other people they get people to follow them because they have a certain type of charisma. And there’s always people willing to take over you know, people want a leader you know – and there’ll be more and more of them.
BB: There have been times when Born Again Christianity, orthodox Judaism… both of those were important to you?
BD: Yeah.
BB: Or is it a broader thing for you?
BD: No… I wanna figure out what’s happening, you know. And… so I did look into it all.
BB: Did it make life easier?
BD: Not necessarily. No!
BB: Did it make it clearer?
BD: It definitely made it clearer. There’s a place you have to work certain things out.
BB: What is it that you do have to work out?
BD: Well, you have to work out where your place is… And who you are. Er… but we are all spirit, it’s all we are; we’re just walking, you know, dressed up in a suit of skin… and we’re gonna leave that behind.
BD: It’s like people buying a song and the money going to the starving people in Africa… well you know, it’s a worthwhile idea but I wasn’t so convinced about the message of the song (We Are The World). To tell you the truth I don’t think people can save themselves… I just don’t agree with that type of thing.
BD: I like the fans, but I don’t feel I have an obligation to be an example to them… like maybe a baseball player or a football player would. I don’t think I really have to set an example that somebody else has to live up to.
BB: What kind of beliefs do you have in yourself to write the kind of songs you write?
BD: Oh… there’s not really a belief. I really have very little belief in myself to do anything. I just pull it off, you know, it’s amazing to me that I even do it.