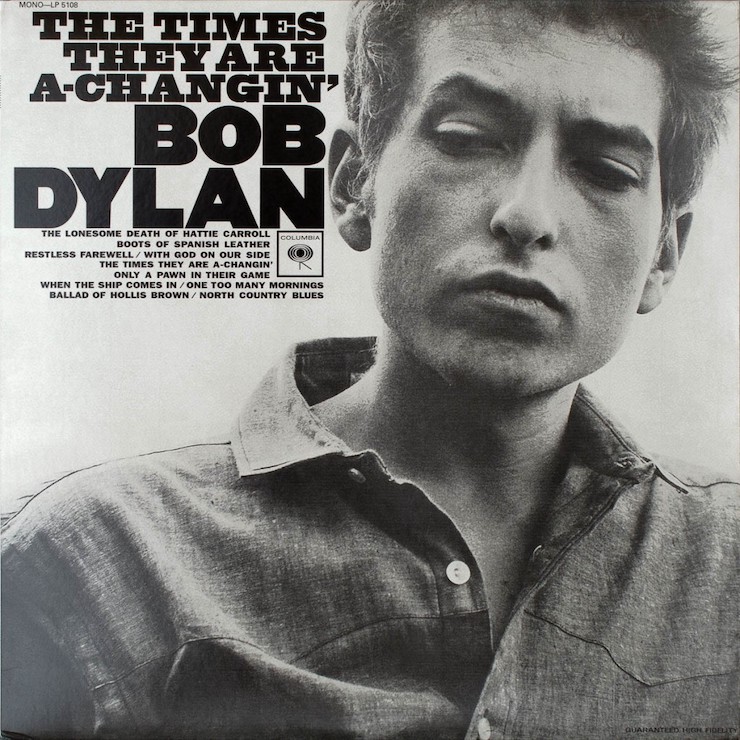 The message isn’t in the words, …. I don’t do anything with a sort of message.
I’m just transferring my thoughts into music. Nobody can give you a message like that.
~Bob Dylan (to Ray Coleman, May 1965)

Dylan’s third album reflects his mood in August-October 1963. It is also a product for his need to live up to and expand on the role he found himself in, topical poet, the restless young man with something to say, singing to and for a new generation.
~Paul Williams (Bob Dylan Performing Artist I: The Early Years 1960-1973


The Lonesome Death Of Hattie Carroll

Oh, but you who philosophize disgrace and criticize all fears
Bury the rag deep in your face
For now’s the time for your tears
(The Lonesome Death of Hattie Carroll)

The story I took out of the newspaper and I only changed the words.
~Bob Dylan (to Steve Allen, Feb 1964)

The Times They Are a-Changin’ is the third studio album by American singer-songwriter Bob Dylan, released in January 1964 by Columbia Records.

Produced by Tom Wilson, it is the singer-songwriter’s first collection to feature only original compositions. The album consists mostly of stark, sparsely-arranged ballads concerning issues such as racism, poverty, and social change. The title track is one of Dylan’s most famous; many felt that it captured the spirit of social and political upheaval that characterized the 1960s. Some critics and fans were not quite as taken with the album as a whole, relative to his previous work, for its lack of humor or musical diversity. Still, The Times They Are a-Changin’ entered the US chart at #20, eventually going gold, and belatedly reaching #4 in the UK in 1965. Dylan began work on his third album on August 6, 1963, at Columbia’s Studio A in New York City. Once again, Tom Wilson was the producer for the entire album. Dylan had, by the time of recording, become a popular, influential cultural figure.

There were to be 6 recording sessions for The Times They Are a-Changin’. With God on Our Side

If The Times They Are a-Changin’ isn’t a marked step forward from The Freewheelin’ Bob Dylan, even if it is his first collection of all originals, it’s nevertheless a fine collection all the same. It isn’t as rich as Freewheelin’, and Dylan has tempered his sense of humor considerably, choosing to concentrate on social protests in the style of “Blowin’ in the Wind.” With the title track, he wrote an anthem that nearly equaled that song, and “With God on Our Side” and “Only a Pawn in Their Game” are nearly as good, while “Ballad of Hollis Brown” and “The Lonesome Death of Hattie Carroll” are remarkably skilled re-castings of contemporary tales of injustice. His absurdity is missed, but he makes up for it with the wonderful “One Too Many Mornings” and “Boots of Spanish Leather,” two lovely classics. If there are a couple of songs that don’t achieve the level of the aforementioned songs, that speaks more to the quality of those songs than the weakness of the remainder of the record. And that’s also true of the album itself — yes, it pales next to its predecessor, but it’s terrific by any other standard.
~Stephen Thomas Erlewine (allmusic.com) All songs written by Bob Dylan.