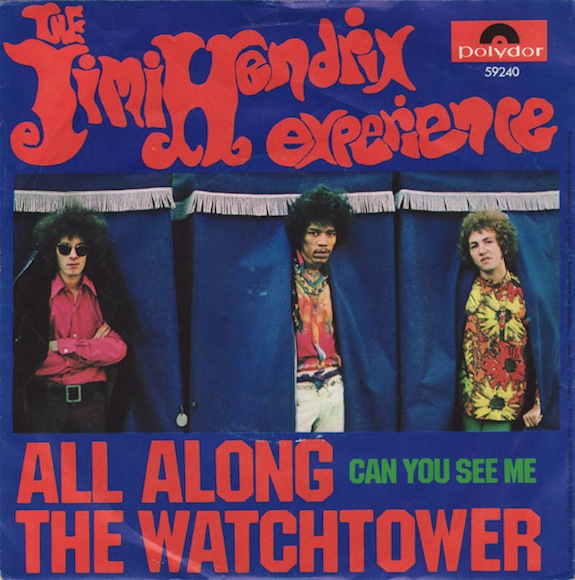 According to Hendrix’s regular engineer Eddie Kramer, the guitarist cut a large number of takes on the first day, shouting chord changes at Dave Mason who had appeared at the session and played guitar. Halfway through the session, bass player Noel Redding became dissatisfied with the proceedings and left. Mason then took over on bass. According to Kramer, the final bass part was played by Hendrix himself. Hendrix’s friend, and Rolling Stones multi-instrumentalist, Brian Jones played the various percussion instruments on the track. Jones originally recorded a piano part that was later mixed out in place of the percussion instruments.

Kramer and Chas Chandler mixed the first version of “All Along the Watchtower” on January 26, but Hendrix was quickly dissatisfied with the result and went on re-recording and overdubbing guitar parts during June, July, and August at the Record Plant studio in New York. Engineer Tony Bongiovi has described Hendrix becoming increasingly dissatisfied as the song progressed, overdubbing more and more guitar parts, moving the master tape from a four-track to a twelve-track to a sixteen-track machine.

The finished version was released on the album Electric Ladyland in September 1968. The single reached number five in the British charts, and number 20 on the Billboard chart, Hendrix’s only top 20 entry there. The song also had the number 5 spot on Guitar World’s 100 Greatest Guitar Solos. Hendrix’s recording of the song appears at number 47 on Rolling Stone’s 500 Greatest Songs of All Time, and in 2000, British magazine Total Guitar named it top of the list of the greatest cover versions of all time.

One thought on “January 21: The Jimi Hendrix Experience recorded All Along The Watchtower in 1968”