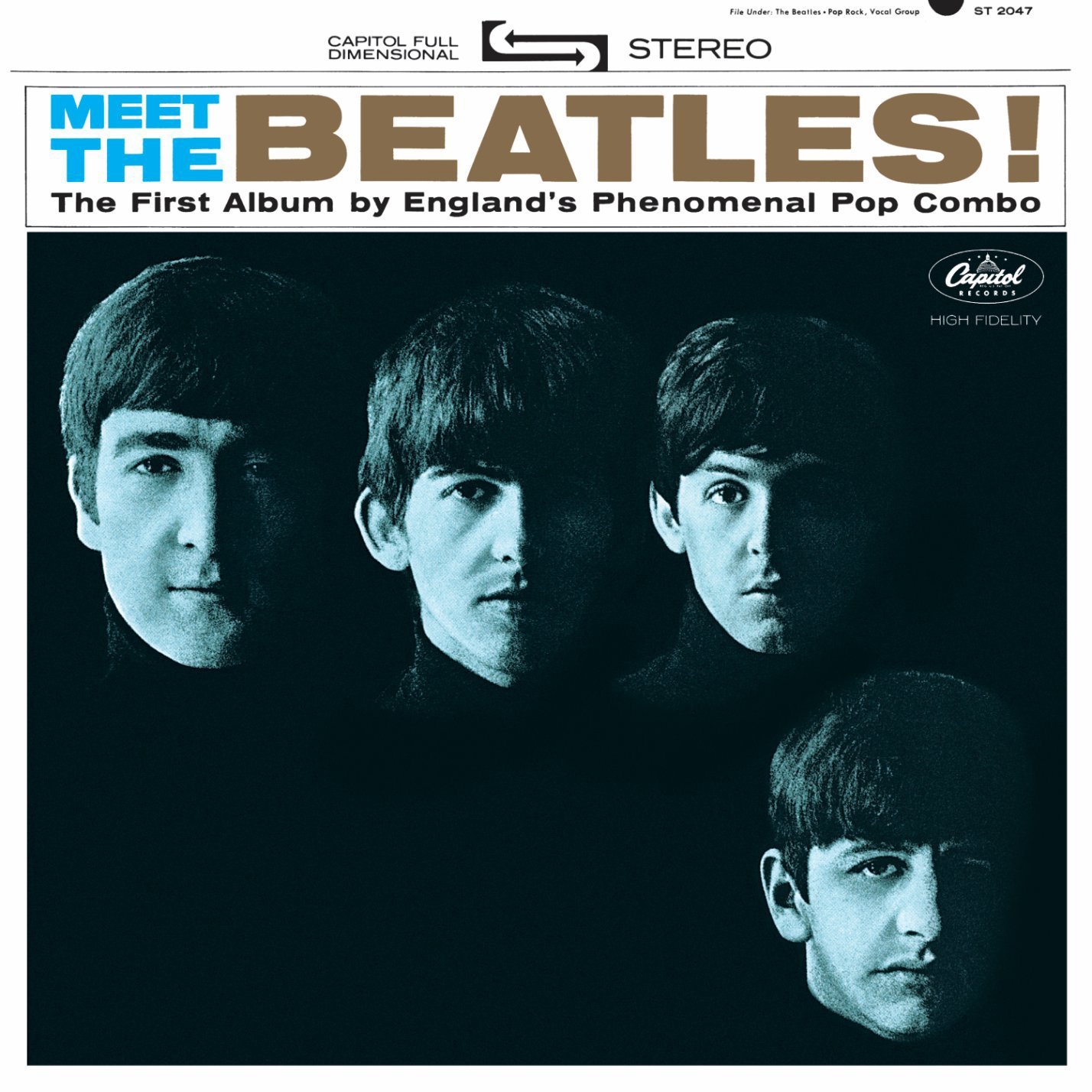 Meet the Beatles! was not their first album released in USA, but as the first Beatles album released by Capitol Records, it was indeed the record where many millions of Americans were introduced to them.

It topped the popular album chart on 15 February 1964 and remained at number one for eleven weeks before being replaced by The Beatles’ Second Album. The cover featured Robert Freeman’s portrait used in the UK for With the Beatles, with a blue tint added to the original stark black-and-white photograph.

After constantly rejecting requests by both Brian Epstein and George Martin to release Beatles records in the United States, in November 1963 EMI label head Sir Joseph Lockwood sent a deputy to Los Angeles ordering Capitol Records to commence releasing and promoting Beatles product in the United States. Despite the “first album” claim on its cover, ten days prior to its release Vee-Jay Records of Chicago beat Capitol to the punch with the release of the Beatles’ American debut album Introducing… The Beatles, which had been delayed for release for various reasons since the previous summer. Perhaps as a result of the Vee-Jay release, Liberty Music Shops advertised in the New York Times of 12 January 1964 that Meet the Beatles! was available for purchase, an ad not authorised by Capitol.

In 2003, Meet the Beatles! was ranked number 59 on Rolling Stone magazine’s list of the 500 greatest albums of all time. In 2004, the album was released for the first time on compact disc in both stereo and mono as part of The Capitol Albums, Volume 1 box set. In 2014, Meet the Beatles was issued on CD again, individually and included in the Beatles boxed set The U.S. Albums.

It is not on Spotify so I had to make a playlist:

By November 1963, the Beatles had already recorded over 35 songs for EMI, while Capitol Records in the US planned to release an album and a single, and more at a later date. The first 14 recordings were in custody of Vee Jay Records along with a couple others. “She Loves You” had been issued by Swan Records and also went nowhere. In the United Kingdom, Parlophone Records was already releasing the second Beatles album With the Beatles and had released several singles which were not included on any albums with the exception of the first two (“Please Please Me”/”Ask Me Why” and “Love Me Do”/”PS I Love You”). While the Beatles’ first two British albums each contained 14 tracks, in the American market albums were typically limited to 12 tracks and it was expected for albums to include the current hit single.

The Beatles – I Want To Hold Your Hand – Performed Live On The Ed Sullivan Show 2/9/64:

The first three tracks on the album include the December 1963 Capitol single “I Want to Hold Your Hand” along with the record’s B-sides both in the United States, “I Saw Her Standing There,” and in the United Kingdom with “This Boy” from the original November 1963 release. Neither “I Want to Hold Your Hand” nor “This Boy” had appeared on album at the time in the UK, while “I Saw Her Standing There” had been the lead-off track to the band’s debut album. The other nine tracks of Meet the Beatles! are duplicated from its nearest UK counterpart album With the Beatles. Those were Beatles original songs and not remakes of songs done by other artists with exception of “Till There Was You”. The remaining five tracks from With the Beatles were songs originally recorded by other artists. Capitol determined that for their first album they would only include original and fresh material. There was fear that the remakes would turn Americans off the Beatles. Those other five songs would appear on Capitol’s next LP release in the US, The Beatles’ Second Album.