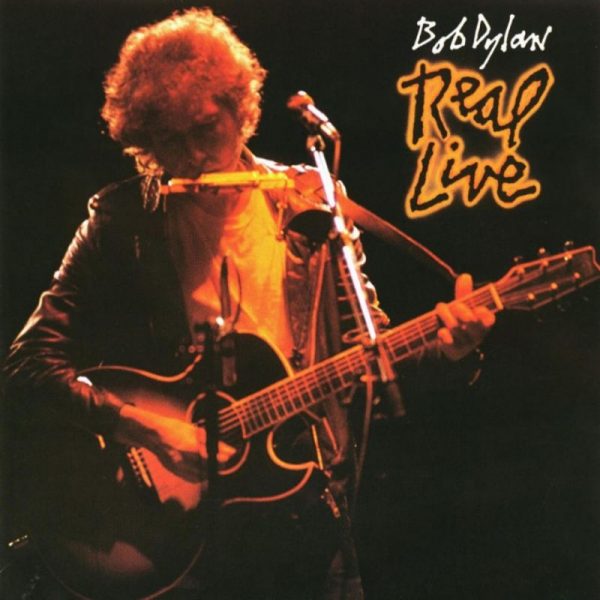 Real Live is a live album documenting Bob Dylan’s 1984 tour of Europe, released at the end of that same year by Columbia Records. Most of the concert was recorded at Wembley Stadium on 7 July, but “License to Kill” and “Tombstone Blues” come from St James’ Park, Newcastle on 5 July, and “I and I” and “Girl from the North Country” were recorded at Slane Castle, Ireland on 8 July.

Produced by Glyn Johns, it features Mick Taylor (formerly of the Rolling Stones) on lead guitar, Ian McLagan (formerly of the Faces) on keyboards, and a guest appearance from Carlos Santana. The performances on Real Live were recorded in support of his successful Infidels album. While Infidels was hailed as a “return to musical form” (as described by Kurt Loder in Rolling Stone magazine), critical reception for Real Live was generally mixed.

Released in December to capitalize on the Christmas shopping season, Real Live still sold in disappointing numbers, reaching a then-career low of #115 in the US and #54 in the UK.

Tangled Up In Blue (Real Live):Dylan’s fourth live album…. you could hardly offer a worse live album from Dylan’s 1984 tour of Europe than this. The choice of songs is hopeless, the choice of performances injudicious, the production inexcusably murky. How did the

supposed ace-producer Glyn Johns manage this? At the very least, Dylan’s expensive, classy guitar should have a good sound. Dylan’s major re-write of ‘Tangled Up in Blue’, featured prominently and exclusively on this tour, is included—but represented by a swaggering, mannered, unfelt performance. There were far finer moments than this. The Barcelona concert is generally judged outstanding. The album waywardly misrepresents this tour in particular and the whole glory of Bob Dylan in live performance generally.
~Michael Gray (The Bob Dylan Encyclopedia

….a lovely, grace-filled acoustic performance of “Girl from the North Country,” from the July 8 concert at Slane.

This is sweet, naked, and very affecting. It is not, I might argue, great art, because although it is heartfelt it does not go down to the deep place where new and unexpected feelings burst through. Perhaps it is Dylan’s very concentration on opening and sharing himself that, paradoxically, keeps this from happening. No matter. It’s still a wonderfully intimate performance.
~Paul Williams (Bob Dylan, Performing Artist: The Middle Years, 1974-1986

Hitch Mick Taylor to a locomotive, make sure the songs are twenty years old, and you could get shit. But you could also get a decent live album if the auteur happened to be interested that night. “Maggie’s Farm” and “Tombstone Blues” are the keepers, “License to Kill” and the ludicrous white reggae “I and I” are the ringers, and “Tangled Up in Blue” gets some new lyrics–or maybe they’re really old ones. B
~Robert Christgau

All songs by Bob Dylan.