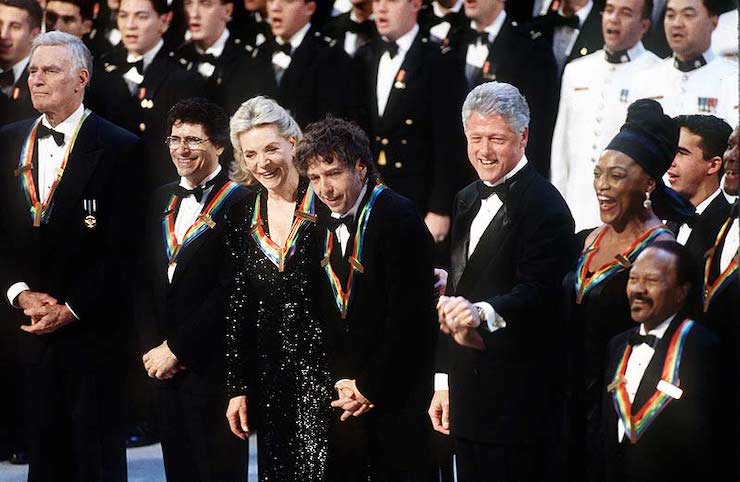 As recipients don’t give a speech and musicians don’t perform, here are some other artists honoring Bob Dylan on December 7, 1997.

Bruce Springsteen performing “The Times They Are A-Changin'”

When I was a little kid in La Jolla, California, which is a very small town, we had a parade on the 4th of July and I remember clearly the sight of Civil War veterans marching down the main street, kicking up the dust. The first time I heard Bob Dylan, it brought back that memory. And I thought of him as something of a Civil War type. A kind of 19th century troubadour. A maverick American spirit. The reediness
of his voice and the spareness (?) of his words go straight to the heart of America.

Some time ago I bought a new Dylan album and I was listening to a song called Brownsville Girl and I heard these lines:

There was a movie I seen one time. I think I saw it through twice. It starred Gregory Peck. He wore a gun and was shot in the back. I just can’t get it out of my head.

Dylan was singing about a picture that I made called The Gunfighter about the lone man in town with people comin’ in to kill him and everybody wants him out of town before the shooting starts.

When I met Bob, years later, I told him that meant a lot to me and the best way I could sum *him* up is to say – Bob Dylan has never been *about* to get out of town before the shootin’ starts. Thank you, Mr. Dylan, for rocking the country…and the ages.”

(Man In the Long Black Coat) “He is a man of music. A poet. A teller of tales. His birthplace was Minnesota, a land of small towns and nowhere to go. His teachers were the poets he read and the music he listened to. He took from here and there and stirred it into the music that already ran through him. He left Hibbing one night in a snowstorm and headed to New York. To Greenwich Village where protest and dissent were strung on a guitar.
(Talkin’ New York) Though he was just a kid, he was a keen observer. He looked out on America and told us what he felt.
(Blowin’, Masters) His cadences prodded and provoked. His words cut to the quick.
(Time’s Changin’) His songs became the rallying cry for a generation. The anthems of their time.
(She Belongs To Me) He turned his songs inward. And with a rush of poetic images, he took us deep inside.
(Tambourine Man) Then he expanded the canvas. Plugged in to rock ‘n’ roll.
(Rolling Stone) He exploded the form. Shot it through with ideas that made us think. It was a restless reinvention of the music. Album after album.
(Stuck Inside) In time, the children of the children would take up his songs as their own.
(Just Like A Woman) Who is this fellow Bob Dylan? He is surprises and disguises. He is a searcher with his songs.
(Tangled Up) (Most of the Time – “I can survive and I can endure”) In him we hear the echo of old American voices. Whitman & Mark Twain…blues singers, fiddlers and balladeers. Bob Dylan’s voice reaches just as high and it will linger just as long…”