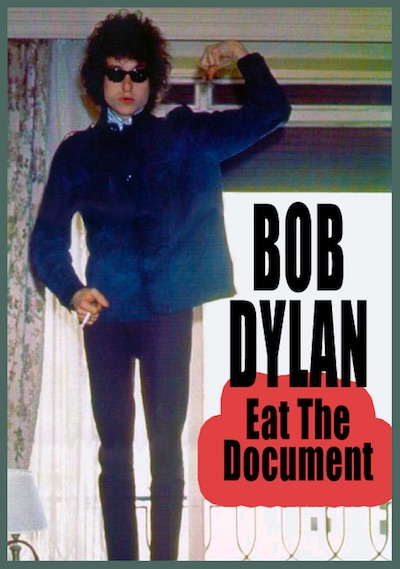 I’ve always been waiting for an official release of Eat The Document. Now you can consider it as released. It’s more than a bootleg – here you can watch the film in a stunning quality: Very, very good picture quality and sound. …  Highlights of Eat The Document for me are the episode with Johnny Cash and the on stage performances – especially “Ballad Of A Thin Man”. This edition is a must have!
–> Review from DVDylan.com

Eat the Document is a documentary of Bob Dylan’s 1966 tour of the United Kingdom and Ireland with the Hawks.  It was shot under Dylan’s direction by D. A. Pennebaker, whose groundbreaking documentary Dont Look Back chronicled Dylan’s 1965 British tour. The film was originally commissioned for the ABC television series ABC Stage 67. END_OF_DOCUMENT_TOKEN_TO_BE_REPLACED