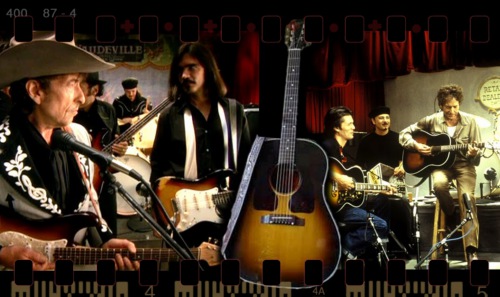 Now that Sam Peckinpah is no longer available, Tarantino should make this his 10th film, Lily, Rosemary and The Jack of Hearts – Bob Dylan:

“Dylan has so many story-songs under his belt, from the surrealist goof of “Bob Dylan’s 115th Dream” to the ripped-from-the-headlines “Lonesome Death Of Hattie Carroll,” that it’s hard to single out just one. But one of his finest yarns turns up on 1975’s Blood On The Tracks—this Western about a charming rogue who blows into town and gets the better of villainous mine owner Big Jim, with the help of Jim’s showgirl mistress Lily and put-upon wife Rosemary. The song’s cinematic sweep makes it feel like it might have been a great film in the hands of a director like Howard Hawks or Dylan’s friend Sam Peckinpah. And in fact, Dylan tried at least once to get a screenplay based on “Lily” off the ground.”
– A.V.Club

I have to include Tweeter and The Monkey Man by Travelling Wilburys, it is just so cinematic in it’s storytelling. Shane Black would have been an excellent choice to make this into a neo-noir / gangster comedy :