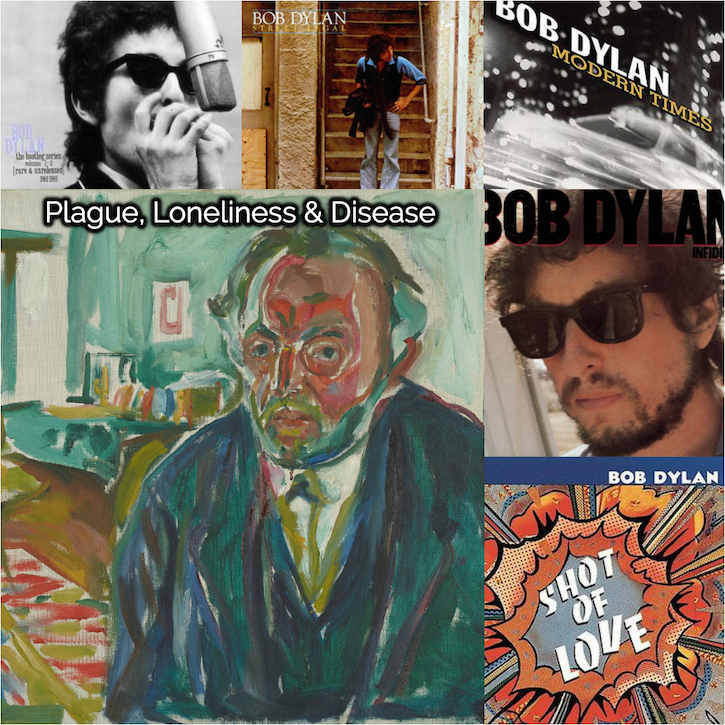 Stay safe, stay observant and may God be with you.
– Bob Dylan

One year, and still not over. Let’s seek “comfort” in the words & music of Bob Dylan.

No Time to Think

Mercury rules you and destiny fools you like the plague with a dangerous wink
And there’s no time to think.

Ain’t nothin’ left here partner, just the dust of a plague
that has left this whole town afraid
From now on, this’ll be where you’re from

Ain’t talkin’, just walkin’
Through a world mysterious and vague
Heart burnin’, still yearnin’
Walking through the cities of the plague

Where Are You Tonight?

I fought with my twin, that enemy within
’Til both of us fell by the way
Horseplay and disease is killing me by degrees
While the law looks the other way

There are those who worship loneliness, I’m not one of them:
In this age of fiberglass I’m searching for a gem.

Every Grain Of Sand

I have gone from rags to riches in the sorrow of the night
In the violence of a summer’s dream, in the chill of a wintry light
In the bitter dance of loneliness fading into space
In the broken mirror of innocence on each forgotten face

Marchin’ To The City