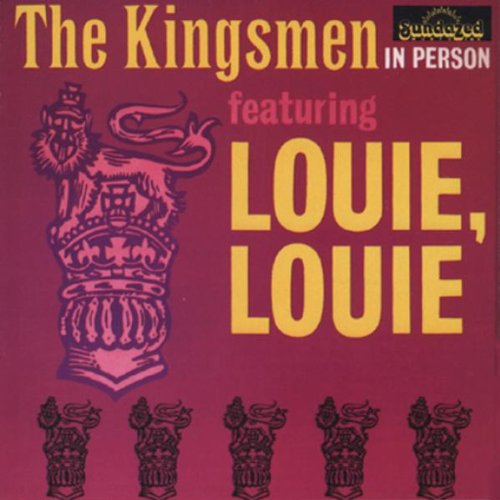 Written by Richard Berry in 1955 and best known for the 1963 hit version by The Kingsmen. It has become a standard in pop and rock, with hundreds of versions recorded by different artists.
The Kingsmen (from Portland, Oregon), recorded “Louie Louie” on April 6, 1963 at Northwestern, Inc., Motion Pictures and Recording in Portland. The session cost $50, and the band split the cost. On September 5, 2013, the city of Portland dedicated a plaque at the site (411 SW 13th Avenue) to commemorate the event.

Be My Baby – The Ronettes Written by Jeff Barry, Ellie Greenwich, and Phil Spector. It was first recorded and released by American girl group The Ronettes as a single in August 1963 and later placed on their 1964 debut LP Presenting the Fabulous Ronettes featuring Veronica.
In 2004, the song was ranked 22 by Rolling Stone in its list of The 500 Greatest Songs of All Time and described as a “Rosetta stone for studio pioneers such as the Beatles and Brian Wilson,” a notion supported by Allmusic whom writes, “No less an authority than Brian Wilson has declared ‘Be My Baby’ the greatest pop record ever made — no arguments here.”

The night we met I knew I needed you so
And if I had the chance I’d never let you go
So won’t you say you love me? I’ll make you so proud of me
We’ll make ’em turn their heads every place we go

I Saw Her Standing There – The Beatles Written by John Lennon and Paul McCartney, and is the opening track on the Beatles’ debut album, Please Please Me, released in the United Kingdom by Parlophone on 22 March 1963.
It was ranked #139 on Rolling Stone’s list of the 500 Greatest Songs of All Time.

Well, she was just 17
You know what I mean
And the way she looked was way beyond compare
So how could I dance with another (Ooh)
When I saw her standing there Popularized by Johnny Cash and co-written by June Carter Cash and Merle Kilgore. The single appears on Cash’s 1963 album, Ring of Fire: The Best of Johnny Cash. The song was originally recorded by June’s sister, Anita Carter, on her Mercury Records album Folk Songs Old and New (1963) as “(Love’s) Ring of Fire”. “Ring of Fire” ranked No. 4 on CMT’s 100 Greatest Songs in Country Music in 2003 and #87 on Rolling Stone’s list of The 500 Greatest Songs of All Time. An operatic ballad of lost love, it was released as a single on Monument Records in February 1963. It became the title track on the album In Dreams, released in July of the same year. The song has a unique structure in seven musical movements in which Orbison sings through two octaves, beyond the range of most rock and roll singers.
Rolling Stone listed “In Dreams” at number 319 of their 500 Greatest Songs of All Time.

A candy-colored clown they call the sandman
Tiptoes to my room every night
Just to sprinkle star dust and to whisper
“Go to sleep, everything is alright” A 1963 single by Buck Owens, who also wrote the song. The single would be Buck Owens’ second number one on the country charts spending sixteen weeks at the top spot and a total of thirty weeks on the chart. Released on The Black Saint and the Sinner Lady on Impulse! Records in 1963. The album consists of a single continuous composition—partially written as a ballet—divided into four tracks and six movements.
–

Then He Kissed Me – The Crystals written by Phil Spector, Ellie Greenwich and Jeff Barry. The song, produced by Spector, was initially released as a single in July 1963 by The Crystals. It is a narrative of a young woman’s encounter, romance, and eventual marriage with a fellow youth.

Well, he walked up to me
And he asked me if I wanted to dance
He looked kinda nice
And so I said, “I might take a chance” A country-popular music song composed by Hank Cochran. The original version of the song was recorded by Ray Price during 1963. It has remained a country crooner standard ever since.

Make the world go away
Get it off my shoulder
Say the things we used to say
And make the world, make it go away A 1963 number one hit single recorded live by “Little” Stevie Wonder for Motown’s Tamla label. Wonder’s first hit single, “Fingertips” was the first live, non-studio recording to reach number one on the Billboard Pop Singles chart in the United States since Johnny Standley’s 1952 comic monologue “It’s in the Book”. Written by Danny Dill and Mel Tillis. Bobby Bare’s version was released in 1963. A Christmas holiday song originally sung by Darlene Love and included on the 1963 Christmas compilation album, A Christmas Gift for You from Philles Records. The song was written by Ellie Greenwich and Jeff Barry along with Phil Spector, with the intentions of being sung by Ronnie Spector of The Ronettes.

Pain In My Heart – Otis Redding Pain in My Heart is the debut album of soul singer-songwriter Otis Redding. Redding recorded for Volt Records, a subsidiary of Memphis, Tennessee based Stax Records; Volt LP releases were initially issued on the Atco label, which released this album (with the singles issued on the Volt label).
The song was released as a single in 1963.

Pain in my heart
she’s treating me cold
where can my baby be
Lord no one knows.

Heat Wave – Martha and the Vandellas

A recording by The Chiffons which topped the Billboard Hot 100 for four weeks in the spring of 1963. One of the most instantly recognizable Golden Oldies with its doo-lang doo-lang doo-lang background vocal, “He’s So Fine” is also renowned as the plaintiff song in the now-infamous plagiarism case against George Harrison’s “My Sweet Lord”.

On Broadway – The Drifters

Written by Barry Mann and Cynthia Weil in collaboration with the team of Jerry Leiber and Mike Stoller.
The Drifters released their version as a single in 1963.

Written by Earl Green and Muscle Shoals Sound Studio songwriter Carl Montgomery, made famous originally by country music singer Dave Dudley. First released in 1963, the song became a major hit that year and is often hailed as the definitive celebration of the American truck driver.

Well, I pulled out of Pittsburgh,
Rollin’ down the Eastern Seaboard.
I’ve got my diesel wound up,
And she’s running like never before.
There’s a speed zone ahead, all right,
I don’t see a cop in sight.
Six days on the road and I’m gonna make it home tonight.

Can I Get A Witness – Marvin Gaye

Listen everybody, especially you girls
Is it right to be left alone
While the one you love is never home?
I love too hard, my friends sometimes say
But I believe, I believe